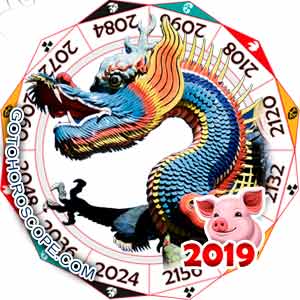 Chinese 2019 Horoscope for the Zodiac sign Dragon, for the 2019 Yellow Earth PIG Year

Those born in the year of the Dragon belong to the elements of the Earth and represent the first triangle of the Chinese horoscope. Pig, the patron of 2019, is the element of Water and the fourth triangle that is antagonistic to the first. As a result, the year 2019 will turn into a dynamic and fundamental one. In other words, any of your words and actions will lead to immediate consequences and results that can easily change something or someone. An energetic and self-confident Dragon should focus on two of his qualities in 2019: his intellect and his passion. It would seem that these features are mutually exclusive in many situations and aspects, but the Dragon quite successfully combines them throughout his life, and this unique skill will reach its climax right now.

As you know, great power carries a great responsibility, but fortunately the patron of 2019 will be supportive of the Dragon and will favor his honest and frank impulses. If the Dragon is facing a situation in which confidence leaves him, he should not surrender in any case. It is not the best option to stay in the same spot because it is not only your own destiny that depends on your actions. Progress in everything is the motto of the Dragon for the year of the Pig! Just do not go too deep into the causes of such events. If something good and meaningful is happening, does it really matter why is it happening? After all, you can get disappointed by discovering the answer.

Dragons with personal ventures should act cautiously during this year in order to benefit. In addition, rechecking all your opportunities before making the next step forward can slow you down, but it will protect you from mistakes that will turn into something critical for others. It is a good time to compete for a spot under the sun. Pig recommends using the old proven method - divida et impera. If the Dragon is not sure whether he will be able to surpass the competitor in everything, you can try doing it step by step. The main thing is to set goals that will be as ambitious as possible, because in the future the foundation established during this period will serve as a support in upcoming periods.

For those Dragons who do not have their own business, the patron of 2019 recommends finding your true calling and finally settling on an area to concentrate your efforts. This cycle is good in terms of a large number of prospects and the ability to choose almost any of them. There is no one to be embarrassed by the fact that the Dragon can make a choice in favor of a sphere that he has zero competence in. For example, you are a lawyer, but you want to work as a doctor. The situation is a bit exaggerated, but the Pig will prove that nothing is impossible in 2019. This time is not for risks, but for deliberate decisions that will predetermine the fate of both the Dragon himself and his loved ones in many ways.

Talking of the loved ones - 2019 for the representatives of your sign will have its own nuances. First, you should not stress too much over anything as almost any conflict that took place in your family will resolve itself in the near future. And if the Dragon really wants to participate, he can speed up the process, but the main thing is to carefully filter your own words to avoid hurting someone. On the other hand, there are no restrictions on the love front for the Dragons. If you want to strengthen relationships, go ahead and just take a step in this direction. If you want to part with your sweetheart for a better relationship with someone else (it at least looks like a better one), there are also no problems. Some Dragons will finally make the decision to marry someone, and some will make some smaller, but equally important, decisions. The period of the Pig's year is good because even the most difficult steps will have a minimum of negative consequences (or, most likely, will be entirely free of them), so it is the best time to decide on anything.

sobreaver 2018-11-11 11:34:09
+1
Navigating the dark such is the life of everyone. Gaining a sens of order, of mechanism, is indeed interesting to the mind in somewhat securing its actions and thoughts but it is still no guaranty for it always remains incomplete, and mostly, we may somewhat perceive a glimpse of a bigger order and realize our own will isn't in accordance with that order which will make us feel 'wrong', perhaps inadequate, or perhaps frustrated that we cannot access the way of our desires. It is just hard sometimes to grasp it all, and some other times we don't even feel the need to grasp it all yet still are able to act in accordance and get favorable result in the end, despite not knowing it all, despite not understand it all. This is what mostly faith movements and religions will try to sooth (more or less adequately) with their principles and views, simply a way to get going through despite not understanding it all. But this is what meditation and self-awareness is trying to teach us just the same, to help you reach an inner confidence in 'every' situation, the good ones when everything almost seems to run smooth on its own but also in the rainy days when things tend to get difficult and incomprehensible, because the world, the universe, is very big and very small, you are in the middle of it all, you are the I of the storm of your world. This is why you need to collect yourself every now and then, to listen and understand yourself whenever you can in order to stabilize yourself in the long run through rough times. Because easy is easy for anyone, hard is not always hard the same way depending on our abilities, potentials, self-understand and self-achievements. 'Immortality' is accessible to all but remains something that we must/have to access, it is not simply given or granted, but by the simple fact of your life, it is accessible, it might just not be exactly what you thought of it in your mind. Nevertheless, allow yourself the transformation of your decisions and therefore, pay attention to the decisions that you make for yourself for they will reflect upon you and ultimately upon others around you. No human has ever avoided death, Immortality isn't about such goal either, it is about being reborn, thus changing. Do not worry about the unknown and pay attention into knowing better of yourself and what surrounds you and sharpen your judgement with every steps and in this way you will always grow, you will progress no matter how small the progress is, it is still progress. May you find peace, guidance and enlightenment through it all.