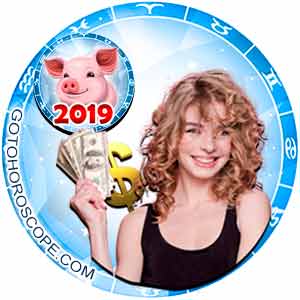 Money Horoscope 2019 for the year of the Yellow Earth Pig

From the view of general astrological combinations of 2019, the sphere of finance and the career sphere will have multidirectional tendencies.

If in the career we will be helped by Mars, and the main opponent will be Mercury, from the point of view of purely material prosperity, the red planet will turn out to be our supporter, and the heavenly patron of trade will fully support us. And this is despite the fact that Mercury's position in 2019 as a whole is not particularly benevolent. Specifically in terms of monetary well-being and money turnover, Ceres and Luna will enter the game, so Mercury will have nothing left but to neutralize its own negative forces.

Actual stellar changes will lead to the fact that all the signs of the Zodiac in 2019 will be able to significantly improve their financial condition. Probably a one-time inflow of a significant amount of money will occur in the first months of the year, but in this respect everything will be very individualized. In a number of cases, it will be about getting investments either from old partners or from new colleagues. And in the second case, it may even be from those who previously acted as an opponent. The stars recommend you not doubt the sincerity of such intentions, but to defend yourself legally from all sides, just to be cautious. Other variants are also possible - for many, unexpected material bonuses will be the result of systematic work and personal merits, both those obtained in the previous cycle, and those acquired in the process of reaching the peaks that many of us will have time to conquer in the first half of 2019.

The year of Pig will be good for cash investments. Some signs of the Zodiac may take a chance, but for most of us, adventurism should be moderate. The largest financial influx is expected, as already noted, at the beginning of the year, as well as at the height of the summer season and under the most final cycle. In the rest of the time, finances will be quite stable, not sagging, but also not soaring upward with violent waves. This characteristic is important for those who need to regularly monitor overall financial trends. Mercury recommends doing their own thing and not worrying too much about the far-reaching plans. In this period, to get higher profits, the emphasis should be on professionalism and diligence, but without fanaticism. For workaholics this may be more difficult because you will have to restrain yourself, not allowing potentially meaningless endeavors.

Horoscope of Finance for 2019 draws special attention to the fact that no external difficulties this year will affect the financial sector. Misunderstanding of personal relationships, or difficulties with obtaining a new place (for example) will not affect the performance (and therefore profit) negatively, so you do not have to worry about this. 2019 Pigs will give everyone a chance to fly to Cyprus or buy a new car.