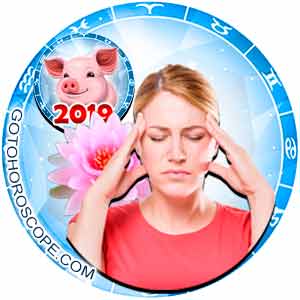 Health Horoscope 2019 for the year of the Yellow Earth Pig

In 2019, which is patronized by the Pig, none of the signs of the Zodiac will be in a critical situation in terms of health.

At this stage, for our physical well-being, the Moon and Venus will respond. Respectively, those signs for which these celestial objects act as stewards or activators, which are Taurus, Cancer, Libra and Pisces, will receive significant bonuses and a minimum of risks.

In general, the year 2019 will develop quite traditionally. In the clear win, there are those who are not accustomed to taking risks and are not going to change and so will have a minimum of risks. On the other hand, 2019 will be quite active and in many situations will require a quick reaction, which can be to the detriment of health. For example, someone will jump out of the house immediately after the shower, because you will urgently need to go to work, and someone will wander into the forest to go camping without looking at the weather forecast. At such times, no star patrons will protect against short-sightedness and, as a result, from colds and other related problems.

In the first half of 2019, many chronic diseases can suddenly come to nothing, and more serious diseases will enter the stage of remission. By the middle of the year, there is likely to be a significant improvement in health. This applies even to those who were not originally resistant to inflammation and infections. In the summer season of 2019, you need to go on vacation, changing your surroundings. This does not need to be to the southern shore, as some people will do better to head north. But here the nuance lies in another - in the public mind the stereotype about the usefulness of the southern seas is firmly entrenched. That's only depending on the type of chronic problem the northern seas, as well as, for example, hot springs in Iceland, can have a totally positive impact on health. This is just one of those situations when you should try to make sure.

From this perspective, the year 2019 for many can be a period of cardinal, when they suddenly decide to break the established tradition. For those who still risk doing this, despite the opinions from the side, the stars will unambiguously provide serious bonuses in the form of recovery (by no means unexpected) and get rid of a number of old problems. In general, according to the horoscope of health for 2019, this period does not impose any general restrictions, each sign of the Zodiac will traditionally have its strengths and weaknesses. Although it must be said that the weak ones, in this annual cycle, will be fewer.