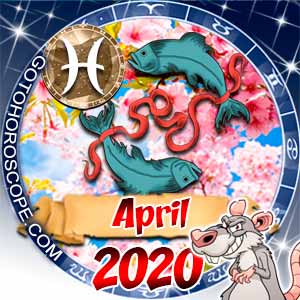 As you’re crossing into the springtime, Pisces, you’re at a good point to make some big sweeping changes in your life just to shake things up. Some of these might be changes you come up with, but a lot of them are going to come at you, whether you’re prepared or not. Don’t panic, though. We’re not talking about devastating changes that completely upend your life. It’s going to be some seemingly low-stakes things in your life that will have a minor effect now, but a bigger effect later. Think of April as the time when your office is being renovated: you go to work like you normally do, but maybe your desk has to be moved and there’s a plastic covering everything. It’s enough of a break in your routine that things seem different, but otherwise, it’s life as usual. And when it’s all done, you’ll have a brand new workspace.

Why is there all this slight shifting of things in your world? There’s a great full moon on April 8th that’s going to have a big effect on your life, Pisces. This is because it’s not just a full moon, but a super moon. What is this going to mean for you? Well, you’re used to seeing the moon in the sky every night. It’s not as though flying saucers are appearing every night this month. It’s this presence of something familiar in a very new light that is the overarching theme for you. Let that new and super moon be your totem through all of April.

If ever there was a month this year for you to do some travelling, April is it, Pisces. This is the perfect time for you to just get out of your geographical comfort zone, even for a bit. This doesn’t have to mean a cruise around the world (but it certainly can if you have the resources). Think about a couple of long weekend trips to places you haven’t been to before. You don’t have to go too far away from home: just pack up for a driving or train destination that is brand new for you. You will benefit tremendously from the new environs and change in your rhythms. Think of the second and fourth weekends of the month for this, but also look to the 16th for some sort of quick day trip. Maybe this is the time to explore your town or to just go for a drive with no particular destination.

That workplace analogy we mentioned earlier is especially apt for you in April, Pisces, as your workplace is going to be going through some changes that might have an impact on you. In fact, forget that “might”: they most definitely will have an impact on you, but they might surprise you in the ways they affect you. Just like that office redecorating scenario we presented, things will be a little different - a little off - where you work for a while. Is someone moving the coffeemaker? Is there a new poster up on the wall? Do you have to take a different route to get there every day? These things sound like small stuff, but they’re going to shift you just enough so that you’re going to be looking at the world from a slightly different, slightly off-angle. And that shift will be enough - provided you keep your eyes open for it - for you to send your life on a different, better trajectory. Keep your eyes especially open around the 8th or so. There will be enough tiny shifts around this date to make things head into some interesting directions.

It’s easy to think of change as something that comes at you fast and hard, completely upturning everything in your life so that you’re never the same again. That certainly happens, but this month, Pisces, you’re going to have your way altered by the little changes: the small adjustments and movements that are enough to shift you into a different mode. Those shifts are enough to have long-standing repercussions in your life and get you closer to paths you’d rather travel. Let the waves of the universe move you, like they’re guiding a small boat. Trust that they’ll send you to the places you’ll want to go to.