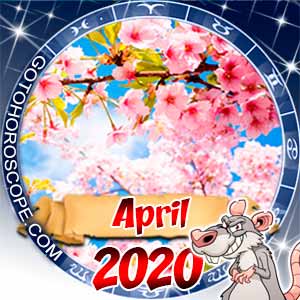 As we enter the second quarter of the year, lots of signs are going to experience a transitional period during the month of April. This is a hinge month: bridging one state of being with another. This means that change is in the air, sometimes gradual and sometimes in a very jarring way. The areas in which this is felt are different for each sign, but what is universal is the need to not be thrown off by strangeness and chaos when it presents itself. Everyone is going to have a different ride down the rapids.

Why is all this happening now? Well, April is always a transitional time no matter which aspect of it you examine. It’s the beginning of spring and that brings constant rebirth. It’s also a time of great lunar activity. The full super moon on the 8th of the month is going to cast a powerful spell over all of the signs. This is probably the biggest source of change for everyone.

But the weirdness doesn’t end with the moon. As everyone is aware, 2020 is a landmark year in interplanetary developments. The Jupiter and Saturn conjunction means that one of the largest mergers in the solar system has taken place and the ramifications from it are immense. This starts a twenty-year cycle of great cosmic change, the scope of which is beyond our current reckoning. What does that mean for April? The waves are starting to be felt. Before they turn into tsunamis, everyone needs to get their bearings and get a sense of how they’re going to ride the waves effectively. This is the time to figure out how to channel that power for good.

The water signs, in particular, are going to feel a lot of sudden, jarring changes during this time. Pisces is probably going to feel it the strongest, although all of the signs will feel sudden changes around the 8th or 9th. Movement in the sky is going to make this very pronounced for Aries and Taurus. What does this mean for the other signs? There’s a sort of cosmic ripple effect that will occur that impacts everyone. This is going to linger throughout the rest of the year and perhaps beyond. Perhaps this is the beginning of a new normal for everyone? Being able to respond to change is going to be crucial for every sign.

Jobs and the economy are going to feel the most flux during this time. If anyone is thinking about career transitions, keep your eyes open especially around the middle of the month. This might be the perfect time to jump ship and move on to greener pastures. Everyone is going to be wrestling with chaos in their own way during this month, so workplace stress is going to be at an all-time high. Every sign will have to either ignore that completely or else watch it with a certain distanced objectivity. No matter what, don’t get swept up into office politics.

And if everyone is feeling some sort of chaos, interpersonal relationships could become strained as well. The Earth signs, in particular, are going to bear most of the brunt of this, feeling strong emotions from loved ones as they wrestle with their own stress and anxiety. While this shouldn’t be ignored, it should be taken for what it is: human beings struggling to find their way in the world. Nothing to take personally, nothing to fret over. Listen to your loved ones, give advice only if it is asked for, be available, but also take care of yourself.

Transitional times mean great tumult, but they also mean great rewards on the other shore. All of the signs should look at April as a fantastic opportunity to embrace change and look towards the future for new beginnings and the start of a new era. The stars and planets aren’t shaking things up maliciously. These are just part of the expected movements of great bodies of nature. They change in the sky to foster growth and renewal. These are positive things that can bring great personal growth, provided we adapt and don’t panic. Carry on, humans, and prepare yourself for the adventure that is the second quarter of the year.