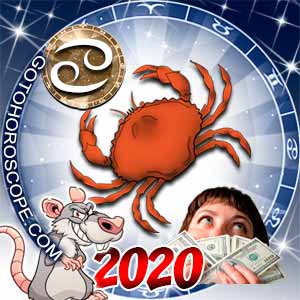 This is an interesting time for you financially, Cancer, especially the start of the 2020 year of the Rat.

This doesn't necessarily mean this 2020 year you're going to stumble upon a pirate's treasure chest in your backyard or anything like that (but who knows?). It does mean that you have hidden treasures elsewhere in your life. "Hidden" in this case doesn't have to mean buried in the Earth. But rather, this means hidden from your everyday view, even if they're hiding in plain sight. You might have some very lucrative goods and services sitting right in front of your nose. These could be old toys in your garage collecting dust that would go for a pretty penny on eBay. This could be a skill or talent that you take for granted which would get you some cash as a side hustle. This could also mean your current employer isn't paying you nearly what you're worth for the valuable work you do. It's very easy to only think of money as that paycheck that comes every two weeks, but don't ignore the other areas in your life that in the 2020 year of the Rat could be turned into some liquid assets quickly. There might be more latent gold in you than you thought. You're probably not going to be able to retire off of them just yet (yet!), but there's nothing wrong with extra money. And a nice side benefit is the recognition that you've got hidden reserves inside of you of all sorts.

January 2020 is the perfect time to figure out a potential side hustle. It doesn't have to be anything crazy. In fact, it's probably going to be something you're already doing. The only difference is that now you should get paid for it. Maybe it isn't hitting you on the head, so take a good look at what you have going on in your life and consider the possibility that you could make some cash for it, even if you don't know how yet. February is when you're going to put that plan into action. It's going to be a hectic month for you, but the rewards from this time will be immense.

Spring means building those skills up even more and saving as much of the money you make from it as possible. You're going to see some pleasantly unexpected growth with those gigs around April 2020. Ride the wave and enjoy it, but also keep saving that money, as much as you can. You're preparing for the literal and metaphorical winter that lies ahead. It's also the time when you're going to develop some less tangible skills that may prove to be very profitable for you later on. These might be people skills that you haven't had the opportunity to fully use, or fully use in a profitable way. It turns out the way you interact with people is very rare and valuable and there are a number of people who will want to hire you to do just that. Don't sell yourself short. Whatever it is that you bring to the table is valuable and you should price yourself accordingly.

All of these hidden treasures throughout the 2020 year are slowly building to some big payoffs. It may take a few years for them to reach critical mass, but by early December you'll see that momentum growing, albeit slowly. Take some pride in that growth, Cancer. Even if it's noticing your savings growing just a bit more each month, it's growth and that's a positive thing. In fact, treat yourself with something small but noticeable this month. No sports cars, but maybe an extravagant night out with dinner and a spa treatment. You deserve it.