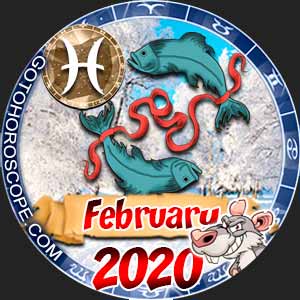 You are a powerful force in the universe, Pisces, and you're just starting to understand the scope of that. Although the world around you might be burning down, you have unimaginable powers at your disposal. You just need to accept it and find a way to harness it. Luckily, you have a celestial backup in February to help you out.

You have a lot of activity in the stars looking at you in February, Pisces. Mercury is entering your house (surprise!) around the 3rd and this is going to create all sorts of havoc in your life, but not all of it bad. Think of him as a wacky houseguest in a sitcom, bringing all sorts of mischief but ultimately teaching you a number of important life lessons. And he's bringing a friend with him: your chum the moon. Look for that full moon appearing on the 21st to have a great lingering effect on your life through the spring. Both are agents of chaos in your life, but you're going to thrive on that chaos.

Careerwise you're in a bit of a rut. Sure, you're paying your bills and getting by, but that's just it: you're getting by. This isn't the path to greatness or great fulfillment and you can do better things. Don't drop the job you have now, but start to dream big вЂ¦ bigger than you have in the past. What would you do if money wasn't a factor? And even if it was, what would you do that would make the hours pass by so quickly you'd never notice? If you didn't worry about greatness or what people would think, how could you sit and just enjoy being in your own skin? Big questions, Pisces, but you're up for the challenge. Start this process right on the first, asking yourself questions like these. By the time the 20th rolls around, have a couple of small scale decisions made. Leave the execution for March and after.

Your love life is a little too stable as well. It's all well and good, but it's time to challenge yourself a bit more. Maybe you've been staying away from the dating world, preferring quiet nights at home. Or maybe you've settled for a partner who is just вЂokay'. Whatever your situation, it's time to break things up a bit. What do you want from love? What do you expect it to do? When Valentine's Day rolls around, ignore all the commercialism and hype and ask yourself that hard question: what is it you want? You might take a while getting an answer that makes sense. You may even find that being alone is EXACTLY what you want. That's okay. Just don't settle. You're better than that. And remember that the person you really have to get to love is you. Yes, it's a cliche, but cliches exist for a reason. There's a great deal of truth there.

We could all stand to have a little more money and you're no exception. Trouble is, you're not exactly spending it either. When's the last time you treated yourself to something nice, Pisces? Something REALLY nice? It's been a while and you're overdue. This could (and maybe should) be something incredibly frivolous. Why not? Remember: you can't take that cash with you beyond the grave. It's time to live like a rock star even if you have indie-rock finances. And if you're considering buying a lottery ticket, think about doing so on the 15th. It's an especially lucky day for you.

You are a powerful force, after all, Pisces. Why is it so hard for you to believe that? February is your month and you've got a lot of milestones taking place in it. That's a good time for personal reflection and taking stock, but you can't stop there. You need to push yourself to level up and be what you know you can be. That's going to take some work and some brainpower, but you're no stranger to those things. The biggest challenge to you is to realize you might have the answers to those things after all. They might be right in front of you and you just need to look.