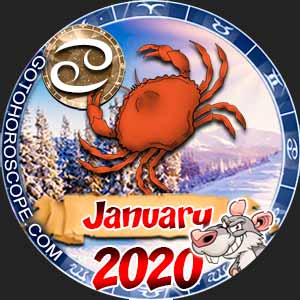 Let's cut to the chase, Cancer: you're going to need to hit the ground running when it comes to your job. That first week of January will be like you've suddenly shifted into fifth gear from first. If that sounds jarring, it's because it is, but you're going to have to roll with it as best as you can. Why is this happening? Blame the appearance of Pluto in your sky this month, especially in the first half. Pluto's appearance is a bit like the owner of a company paying a surprise visit to see how everyone is doing. On the surface, it's a benevolent gesture, but the effect on everyone is panic and franticness. That's what's happening to you, and it just so happens that your workplace is where you're going to feel it the most. As best as you can, let all that panic around you roll off your back and continue to do your work to the utmost of your abilities. And then push it a little bit further. While you're hitting the ground running, you're going to use January as the time to really, really excel at your position. Why is that important now? Because you're going to gauge at the end of the month if this is what you'd still like to be doing for the rest of the year.

So that appearance from Pluto we mentioned earlier is going to be disruptive in all sorts of ways. And just like the word "disruptive" is used in a positive way by hip marketing types, note that these disruptions aren't going to be all bad. Some of them will certainly cause a bit of unwanted chaos in your life, no doubt about that. But some of those disruptions will open up pathways for you, removing blockades. Think of it like a tornado suddenly removing a wall that kept you from where you'd like to be. So for every moment that feels like a terrible upheaval, trust that there will be a corresponding washing away of a bulwark that's been impeding your progress. And remember: Pluto will be leaving by the 29th, so any craziness will only be temporary.

That chaos could also be seen as a disguised opportunity. Think about it: while everyone is running around like chickens with their heads cut off, you're going to recognize the chaos for what it is and make the best of it. This will be most fruitful for you in the area of money. Stock markets may well go a little haywire in January and you would be well served to capitalize on this. No, don't dump all of your savings into the stock market. Do be willing to take some well-calculated small risks in investing. This is a great time to make out like a bandit if you're thoughtful and careful. And if there's a lingering large purchase you've been putting off, well, now's the time. Think about making it on or around the 23rd of January, depending on whatever other discounts are floating around. Don't overextend yourself, but stretch a little. This could be something you've needed for a while or just something that will make your day to day life just that much slightly more easy for you.

With all this chaos swirling around you, Cancer, take some comfort in your friends and family вЂ¦. Or whomever you go to for moral support. They're always happy to offer a shoulder or just a listening ear, but maybe you've been a little wary of leaning on them too much? Put that aside in January. Make it a point to meet with at least one close person this month, especially around the 16th or so. Extra points if it's someone you haven't connected within a long time. Bask in the comfort of the people in your life and use them as a point of stability when everything else around you is a mess. They are more than happy to oblige and you will emerge from the experience calmer and even more ready to face whatever the universe is throwing at you. Pluto is going to create all sorts of messes. There's nothing to do about that. But what you can do is sigh in resignation and chive on. Know that all will calm down by February 1st.