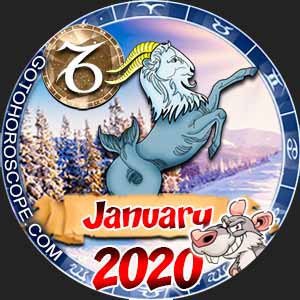 There's a great convergence happening in January 2020 and the primary beneficiary of it is you, Capricorn. What is that event? It's the alignment of Pluto, Saturn, and Mercury, peaking around the 10th. So why should you care? Not only is it a once in a lifetime lining up of big celestial forces, it is perfectly aligned with your house, giving Capricorn the full brunt of its cosmic powers and positivity. The important thing is that you are attuned enough to receive the full blast of these energies and hold on to that positivity as your proceed into 2020. Think of yourself as a sort of superlens and battery: taking in all that power and holding on to it.

January is going to be an odd month for you as far as romance and personal relationships go, Capricorn. Socially you'll be noticed by everyone you come into contact with. If there's ever a time to make a first impression on someone, it would be in January, specifically around the second week or so. That light and energy coming from that planetary alignment are going to be coursing through you, making you very intriguing - if not downright attractive - to the people you encounter. This may not necessarily refer to being attractive in the romantic sense. You could be giving off the aura of someone who is easily employable, or just a delight to be around as a friend. You might be the perfect person to be someone's mentor. Whatever form it takes, just trust in the reaction that you're generating. In fact, on the 6th you should make it a point to put yourself out there so people can see that in you. On this date, get yourself in front of as many people as you possibly can, short of organizing your own parade. You're going to want to show off around this time.

There's a lot of financial stress for everyone in January and you're going to be feeling your share of it, Capricorn. You may not immediately feel the pinch, but everyone around you is, and that's going to translate into stress for you as well. Give everyone a wide berth when it comes to money matters. You might be the one paying for lunch more often than not this month. It's okay. It'll balance itself out through the spring. Meanwhile, keep your head down and keep saving as you have been. You might be looking for some cheaper than usual entertainment during January to fill your weekends. Seek out those matinees and other deals. That said, the 20th is an especially powerful nodal point for you as far as money goes. This might be a very good date on which to buy a lottery ticket. Don't go crazy and put hundreds of dollars down, but you can spare a dollar or two for this. It might well just happen to shine on you.

With Pluto, Saturn, and Mercury in your corner, you have the power to do some incredible things in January, Capricorn. The trickiest thing is probably going to be figuring out what you'll want to do. It's like you have the most powerful moving company at your beck and call, completely ready to answer to your commands. What would you do in that situation? You'd stop a second and think about what you've put off moving because you didn't think it would be possible to do so. So you're going to do just that by the third week in January. You're going to see what you need to get some power behind in your life and then prioritize. Once you have a couple of things on that list, put those planets to work. And you do that by putting your back into it, trusting that those three massive planets are right behind you. That's the secret to harnessing that power: confidence. You need to move through this month with confidence in everything you do. And if you don't have it right at hand, Capricorn, you're going to fake it until you make it. The last week in January is when you'll really want to operate at full confidence capacity. Trust the universe and what it's doing for you. But don't think they'll be doing all the heavy lifting. You're going to be working on it together.