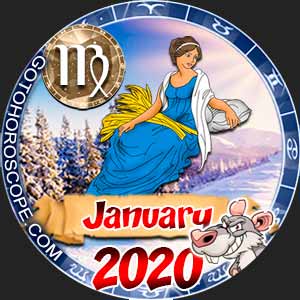 The seeds you planted in December are going to start to burst out of the ground in January, Virgo. You put a lot of hard work in last year with little reward or rest. While it would be premature to say January is when everything is coming up Virgo, there should be enough rewards appearing for you to feel the motivation to keep on moving through 2020. Neptune is making a very prominent appearance in your house in January and the power it has will be very influential. It's going to be a bit like the sunshine finally appearing from behind the clouds, shining a Neptunian sunbeam on your face.

And that Neptune beam is beaming through the window of your office, highlighting you as a star player. Right at the start of January, you're going to act like the star you are at work. This might mean you're going to take on some extra work and volunteer for whatever comes up. Or it might just mean it's time to ask for a bit more money. The important thing is that you're going to march into your job and truly believe that you are a star. No, this doesn't mean you're going to be the arrogant jerk in the office, ignoring everyone and being full of yourself. It does mean you're going to believe your own hype and trust that you know what you're doing. Of course, if you make a mistake or realize that you, in fact, have no idea what you're doing, own it. Suck it up, claim responsibility, learn from it, and move on. All the while you'll want to concentrate your energy on being the best employee you possibly can be. Leave work a little bit later and go that extra mile. By the end of January, you're going to see how all this feels on you. This might be a pattern you'll want to sustain for a while, or it'll really push you to look for another job because you can't take it anymore. Either way, be a star for the month. There will be someone at work noticing everything you do on the 15th or so. Make sure they get a front-row view.

There is a potential love interest that will make themselves known to you by the 9th or so, Virgo. No, they're not going to propose marriage right then and there on the spot. However, someone will enter (or re-enter) your life at that time and linger in your field of vision for a while. Romance may not blossom right away, but they will stick in your mind. This is something that could take quite a bit of time to fully bloom - may be on the order of months or even years. In the meantime, keep this person in your life, even if it's at a distance. By the 18th, you'll probably have had a bit more communication that will confirm this is someone who is going to be in for the long haul. If you're already in a solid relationship, don't worry. This isn't a homewrecker coming to break things up. It might just be a person who is going to prove to be a solid and trustworthy friend. You'll need them at your side over the coming year.

That Neptune ray is going to keep its focus on you all the way through the end of January, Virgo. Hopefully, by the last week of the month you'll have noticed the effect it's having on you. Take a look at this time and see if you notice anything that's getting a little easierвЂ¦.. Something that had previously been a heavy burden. Take a look at your health and physique. Are you losing a little weight that had been hanging around your belly for a while? Is your skin looking a little more clear? Is there a little more lightness in your step? We're guessing that's all going to be the case and you'll be pleasantly surprised. Bask in the glory of that. It means you're on the right track, Virgo, and you need to keep moving in this direction. It's going to be too easy for you to rest on your laurels, so take notice of all you've done, pat yourself on the back, and make a plan to carry forward into February.