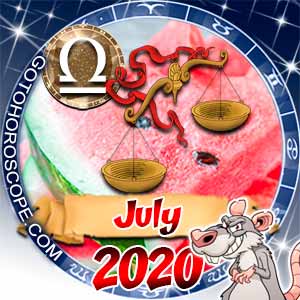 Throughout July, your most important mission is renewing your commitment to yourself, Libra. All month, the focus is on your material and emotional attachments – and whether they’re still serving you. You like to weigh your options, but it pays to be decisive now. As they say, not deciding is a decision in itself. You’ll have some help weighing options though if you can take an objective look at your habits. Are you stuck in a repeating pattern that never yields your desired results? Are you holding yourself back out of politeness? If so, July is prime time to flip the script. That’s easier said than done, especially with the drama of the month. But if anyone can make it through July gracefully, it’s you! All month, support falls into your lap from unlikely places. The deeper into your roots you go this July, the richer the rewards you’ll take with you into August.

Disruptive shake-ups come to light in your fourth house of home, family, and foundation on the 5th. This is something you got a taste of earlier this year and even the year before that. In fact, this full moon lunar eclipse on the Capricorn-Cancer axis is the completion of a cycle that began in January of 2019. This could involve you finishing a project with your house or settling a problem within the family, but there are endings of some sort in this area. You're always striving for harmony and balance, but you may have to say one last goodbye. Whatever is making it hard to equalize your professional life and personal life has got to go.

Thanks to the drama of domestic matters, your love life and health are a little strained all July. Saturn’s retrograde through Capricorn and your fourth house has you rethinking all your foundations. Pay attention to your ancestry, heritage, and traditions over the next couple of months. There’s a good chance you need to toss something you've outgrown that needs a little nudge out the door. Disagreements and misunderstandings with parents and roommates are likely. Until at least the 12th when Mercury stations direct, don't bite off more than you can chew.

Especially around the 11th, you’ll be facing some identity wounds that take an emotional and physical toll. It seems your failures and insecurities are mirrored back to you in every partnership you turn to. From now through at least September, you’re being challenged by retrograde Chiron to enter into a partnership with yourself. Where are you uncomfortable or lost mentally? That’s what you’ll need to review.

Of course, you may not have the patience to review your own psyche’s injuries from the 12th to the 20th. Instead, you’re invested in merging resources and joint finances. The only problem is, you’re probably not clear on what you’re willing to offer until the 20th or after. If you are, your potential partners won’t see the value in your ideas until we move into August.

The key to making it through this unscathed is revisiting your material attachments and all the things you believe you can’t survive without. It’s time to explore what truly belongs to you versus what belongs to others.

Throughout the middle of the month, you’ll come face-to-face with your responsibility to yourself and to others. What steps can you take today toward balancing the scales?

If you aren’t sure where to go from here, there’s no need to worry, Libra. Use the New Moon in Cancer on the 20th and your eighth house to transform your approach to secrets and power. With every new skill you learn, you tip the scales in your favor. Now more than ever, this is a time to go after what you’re owed.

Do exercise caution this July. You’ll attract intense situations like a magnet – in sex, career, and all aspects of life.

The important thing now is to look beneath the surface and uncover what lies in the dark. You could find anything from family secrets to hidden enemies to psychic superpowers. Another likely possibility is an encounter with death or more specifically a death within the family. Although this death isn’t necessarily in the literal sense, you should expect some sort of inheritance before the end of the month anyway.

By the time the sun enters Leo and your eleventh house on the 22nd, you’re focusing on independence and leveraging your creative problem-solving skills to manifest win-win solutions. Although you’ll be feeling quite sociable and attracted to groups, you’re keeping yourself at more of a distance than usual so you can enjoy your own radiance.

As this intense month closes, you’re taking a more impersonal and unconventional approach – especially when it comes to how you network with others. The connections you make now will pay off come September, so enjoy the lighthearted sense of community you’ll have secured as you exit July.