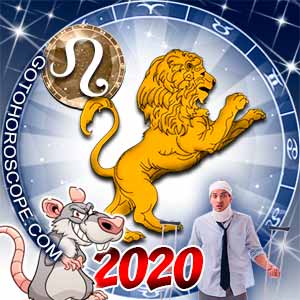 Lions and movie stars have a lot in common, believe it or not, it will be especially right in the 2020 year of the Rat.

You Lions and movie stars both have to look good all the time so that everyone knows who is the most powerful and beautiful creature around. Gotta look good for both the cameras and the other beasts. The 2020 year of the Rat is the year in which you need to crank up your fitness and activity, no matter what point you're starting from. You could be a couch potato or a mixed martial artist. Either way, time to level up.

If you haven't been to the doctor in a while, make that appointment first thing in January 2020. This could be for a regular checkup or to take care of something you've been putting off for a long while. No more excuses. You're going to start this 2020 year off right. After that, spend the middle of January taking a cold, hard look at your diet and activity level. It's okay if it's not where you want it to be. You're going to be attacking this all year long. Even if you're doing well in this department, look for areas of improvement. No matter where you're starting from, you want to level up. This might be the perfect time to pull in the professionals. Set up a time with a personal trainer by the end of the month (no later!). Talk to them about what you want or just say "make me better".

By February 2020 you should have a plan in place and be ready to make it part of your regular routine. Stick to this. If you're finding it's difficult, take an honest look and see if you've overextended yourself. But don't let yourself off that easily. You might just need to take longer to ramp up to the levels you want to achieve. So be it, but stick to it. You're starting the process of building new habits and stretching yourself in ways you haven't (and maybe haven't wanted to) stretched before. Enjoy the opportunity! Many people don't have the advantages you do.

Your target for May 2020 is the start some sort of physical activity that is very foreign to you, maybe even outside of your comfort zone. If you're coming off of the couch to your first trip to the gym, that might be foreign enough for you. If you're a skilled martial artist, it's time to look at weightlifting. If you're a bulky quarterback, take a look at ballet classes. Seriously, you're going to want to pursue an activity that is 180 degrees away from the way you're currently using your body. You might not be great at it and you might feel weird, but your body will eventually thank you.

You're probably going to be exhausted by the autumn. That's a good sign. You know, weakness leaving the body and all that. But don't stop now. Do find time to work in some self-care and pampering, though. If there's ever a time to schedule a spa weekend for yourself, it would be in early October 2020. Make sure it doesn't involve eating fatty foods.

December is when you'll be the king of your own jungle or the star of your personal blockbuster film, whichever metaphor works for you. Even if you haven't hit all the goals you had hoped for, you should be at a higher level than you were in January. This is excellent progress, but don't stop. You've established a new you moving forward into the future. Nurture and grow that person so they can become even better. Enjoy being the king (or the star) during all 2020 year of the Rat!