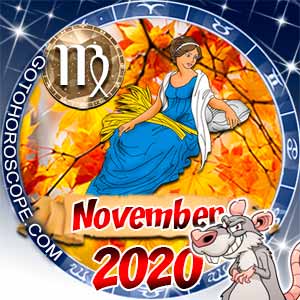 The past few weeks were likely fraught with frustrating delays and kinks thanks to the sporadic energy of Mercury Retrograde, Virgo. You’ll be glad to know that after November 3rd, your ruling planet Mercury is again moving forward, and you’re well-equipped for the ride with the resolutions you’ve found despite the communication breakdowns.

Right now, it’d be wise to tighten up any loose ends and cross any lingering items off your to-do list. If you feel inclined to audit your resources and your flow of income, Mercury in your second house of value promises to help you smooth your ideas and regain whatever time you’ve lost.

Asteroid Ceres enters Pisces on the 9th to add a spiritual touch to your one-on-one relationships. Nurture and balance are strongly linked to any sorts of partnerships right now.

Your ruling planet makes a secondary shift on November 10th. On this day, the messenger planet enters Scorpio and your third house of communication, intellectual activity, neighbors, and siblings. Your writing, speaking, and short-distance traveling should pick up over the next few weeks, and you’ll probably find yourself bumping into neighbors or other acquaintances more so than usual.

Fair warning: ideas will be coming in at lightning speed around the middle of the month. Now that your ruler is back in action, all the mental engines are firing back up at hyper-speed, but you don’t want to make a major decision just yet unless you have to. Instead, gather as much information as possible.

Getting what you felt was yours might have felt like a tug-of-war the past couple months, or you might not have had the energy to tug at all. To change the tide, Mars the planet of action stations direct on the 13th in fiery Aries, ready to charge forward into battle. This gives your eighth house of sex, death, taxes, and shared resources a bit of oomph, so the extra effort you put forward now is sure to pay off. Just make sure you corral your energies and focus your intention; don’t toy around with what you want.

That’s easy to say, but it can be hard to put your finger on what you want around the 15th. As the new moon brings a brand-new cycle to your third house of perception, an endless volcano of ideas could distract you from actually planting your seeds. That’s no small wonder though; others are likely urging you to make a commitment to something. Ignore the pressure if at all possible since you’ll have plenty of time for large decisions later.

If you can manage not to overthink it, don’t let the big amount of ideas coming to you pass you by. Instead, explore as many options as you can and get as far outside your “normal” bubble as you can.

You’re a natural smooth talker after the 21st when Venus adds some suave energy to Scorpio and your third house. Over the next month, you’re a master of words, so any negotiations or communications will be injected with your undeniable charm.

Without even trying, you’re piquing everyone’s interest and drawing people toward your magnetic center just by being yourself.

If you’re on the prowl for a new special someone, keep your eyes open on any short trips or visits with siblings and neighbors. It’s likely you’ll stumble across someone who gets your intellectual gears going without having to venture too far from home. On the other hand, partnered Virgos can expect a boost in conversation activity although whether that’s a good thing or a bad thing is largely up for debate.

The Sun enters Sagittarius and your fourth house on the 21st, prompting you to take the initiative in home and domestic situations. The next month is a great time for understanding the belief systems and philosophies of your family or the habits you inherited from those in your close environment.

When Neptune stations direct in Pisces on the 28th, your seventh house of one-on-one partnerships inspires you to escape into a fantasy world. It’s a great feeling to get whisked away by someone else’s energy, but you need to be careful not to choose an illusion over reality. Have faith in your dreams, but don’t delude yourself into seeing what isn’t there.

November ends with a loud full moon in Gemini and your tenth house. This culmination takes place in the public domain associated with your legacy, achievements, career, public status, and reputation, so there could be an ending or some sort of closure taking place in these areas now. Maybe you’ve finally decided to leave your job and do an about-face regarding your career. Alternatively, you could be transferred to another department or simply taking on another role.

Whatever the full moon ends for you, rest assured in the knowledge that you now have space to manifest your desires in December.