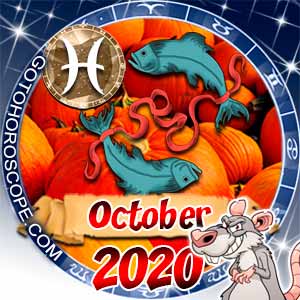 You likely exited last month with an eagerness to communicate your philosophies, especially to large groups of people and friends, but October has all the trademarks of communication breakdowns. As you might have guessed, we’re all due for another Mercury Retrograde around mid-month, so as usual, you can expect more delays and glitches than normal. Luckily for you, this discordance is pretty short-lived, and you should find your footing with words by the time October ends.

Power issues aren’t comfortable by any means, but it seems like an unfair amount of people are out to control your thought processes and behavior. That’s just part of being a Pisces, it would seem. The good news is the Aries Full Moon on the 1st helps you defend against unbalanced contracts or would-be abusers by gearing up in your second house of self-worth.

Your financial earnings come into play now too, so it could be a good time to assess your material resources and how they influence your sense of security. More so than anything physical though, your feelings about your own value as a person and your overall self-esteem are highlighted.

Virgo’s ingress into Virgo and your seventh house underscores this theme by encouraging you to analyze yourself through interactions with others.

Attention is being called to all one-to-one relationships in the next few weeks as an opportunity to observe how others respond to you. Keep your affections adaptable but organized – be practical.

Over the past five months or so, you’ve been really mulling over your position within groups of all kinds and evaluating how your friends or affiliates have treated you. When Pluto stations direct in Capricorn and your eleventh house on the 4th, your tweaked ideals and search for guidance leads the way and sends you into a direction of fruitful growth.

You can’t afford to let people manipulate your kindheartedness one moment longer.

As the most inconvenient transit in the astrological world, no one would expect you to welcome Mercury Retrograde. Starting from the 13th, the planet of communication moves backwards through Scorpio and your ninth house. You can expect delays and frustrating roadblocks over the next three weeks, so do your best to plan accordingly.

This confusing energy is known to knock everyone off course, so it pays to be compassionate and understanding throughout this, especially to yourself. Sometimes the Universe needs to bring us to a standstill so we can check our map and confirm we’re heading in the direction we need to go.

One symptom of Mercury retrograde is when old problems start cropping up like weeds. If anything, unfinished issues you thought you dealt with will show their faces on the 16th. The New Moon in Libra hits your eighth house of debts, contracts, taxes, and shared finances, so this type of thing could manifest as a partner dealing with a problem from the past in a way that directly affects you.

Either way, a new emotional cycle with themes of intimacy and intensity starts now.

With all the Mercury mayhem happening globally, almost no one can communicate the way they really feel. Keep that in mind after the 27th when the retrograde planet enters your eight house to inspect the fresh cycle the new moon brought in.

Favorable activities the last week of October include reviewing your investments and weighing the consequences of your decisions over the past year. At all costs, avoid deluding yourself or deceiving anyone else unless you’re dying to have your secrets exposed in a chaotic way. It is paramount that you tidy up your commitments and brainstorm ideas for reallocating joint resources right now; there is probably something you could use right now that you’ve neglected or forgotten about.

On a brighter note, Venus enters Libra and your eighth house on the 27th too. Financial boosts seem likely, especially if you commit to deepening the right connections.

These next few weeks involving this Venus cycle will have you feeling attraction for intense and provoking characters. There’s a sense of forbidden love in the air, and action between the sheets is sure to pick up, if that’s something you’re looking for. That being said, casual hookups and flings won’t hold your interest right now as you seeking for a pure experience of a passion that runs deeper than the superficial.

Again joint ownership and the act of sharing comes into focus. Somethings things just aren’t worth the focus and energy they require, so make sure to consider the costs and values involved in any exchanges.

Despite the Mercury retrograde communication hiccups, a Halloween Full Moon in Taurus and your third house grounds your grasp over your words and how you share them. This is almost certain to leave you feeling overly busy, but it truly sets you up for social ease and increased alertness as you head into November.