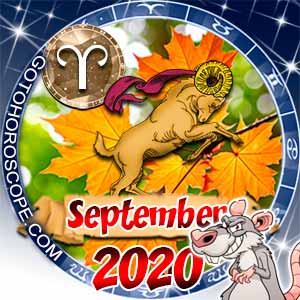 You’re usually quite the optimistic and upbeat type, but there is a bummer midway through September for you, Aries. Although it’s nothing serious, you’ll need to set your need for speed to the side in favor of more sustainable efforts. We all know how many projects you start but never finish due to your endless impatience and readiness to start “the next thing.” So get ready to take your foot off the gas a bit as you enter September.

Everything you put on hold the past six months is blatantly on display on the 2nd. Under the light of the Full Moon in Pisces, all that was hidden in your twelfth house of secrets comes out into the open – at least for you. Your past, memories, and subconscious beliefs drag you into the depths of your psyche so you can revisit the fears and worries (and dreams) you’ve suppressed for too long. Speaking of dreams, you’re likely to have strange ones in the first week of September.

On the 5th, asteroid Pallas Athene stations direct in Capricorn. She is strong here and blesses your tenth house of career with the ability to channel raw creative energy into precise structures. Right now, an instant manifestation is possible, especially in endeavors such as architecture, politics, and sculpture.

Luckily for you, Mercury enters Libra on the 5th. As the planet of communication moves through your seventh house of partnerships, you can see both sides of the argument in your one-on-one relationships, but you’re also likely to “sit on the fence” when you’re pressed to find a fair conclusion. Because your mental activity is increased, thinking can be nervous or rushed, leading to you say something you can’t follow through on in a well-intentioned attempt to keep the peace.

If you don’t want to give everyone the wrong idea, practice saying “I’ll think about it” rather than committing to something you’re unsure of. You don’t have the energy to rescue everyone, Aries.

Love and devotion are loud and proud after the 6th when Venus enters fellow fire sign Leo. You’re passionate when it comes to creative endeavors or romantic, joyful relationships. Being pampered and validated is forefront in your mind. Nothing wrong with that! Who doesn’t love being adored?

With Mars as your ruling planet, you’ll feel his retrograde station more than other signs. He comes to a grinding halt around the 9th, sparking a conflict between your public and personal life. In all likelihood, you’ll have to fight against a workplace issue impinging on your freedom or privacy.

This conflict will reappear in various forms over the next 8-10 weeks, but don’t take it personally. The Universe is just teaching you new ways to express your angers and passions.

Take care not to be ruthless and uncompromising though – the more dignity you handle this transit with, the better. Demonstrate the values and merit you admire the most instead of acting as a rebel without a cause.

September is a bad month for any gambles, but that’s especially true around the 12th. Jupiter stations direct in Capricorn, meaning it’s time to seek practicality and invest in long-standing commitments. Although results won’t be instant right now, you are goal-oriented and can implement your visions with premeditated actions.

If you let the subtle whisper of self-importance and the false light of power distract you though, you’ll get burnt out before you come close to any rewards.

The New Moon in Virgo on the 17th brings a rebirth to your sixth house of wellbeing, so this is the perfect time to start a healthy new habit or find an organized new outlet for your stress.

Right on time, the Sun enters Libra and your seventh house of partnerships on the 22nd. Over the next month, you’ll find more success bounding your ideas off someone rather than going with your gut alone.

Not even a week later, Mercury the planet of communication enters Scorpio and your eighth house. Again, you feel the pronounced need to merge your mind (and maybe even your body) with someone else.

It looks like this merging will require ending something though, so weigh your options.

Retrograde Ceres backtracks into your eleventh house on the 27th as well. This asteroid, commonly known as the Earth Mother, represents the natural cycles of the Earth, so her presence here in Aquarius inspires you to defend all those who have been disenfranchised or suffered injustice.

On the 29th, Saturn stations direct and raise a challenge in your tenth house. Can you acknowledge your limitations while still putting everything into what you believe? You’ll need to practice serious self-evaluation for the rest of the year.

While where you are going may not be quite so clear this month, you’re headed into October with the relief that you are going somewhere indeed.