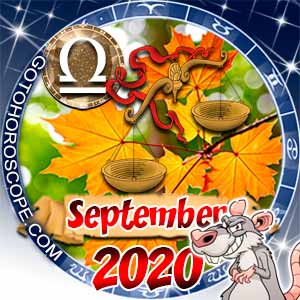 You’ll have to wait a few weeks to get to the best part of September, Libra, but this gives you all the more time to prepare for your upcoming birthday season. Think about how weightless you’ll feel once you emotionally let go of all the problems of last year! This new solar cycle will be so much brighter than the last as long as you take a stand for your own happiness this month.

If you’ve been neglecting your day job or your health, you’ll see the effects bubble up to the surface around the 2nd. As the Full Moon in Pisces culminates in your sixth house of wellbeing, you’ll suddenly become aware of the benefits or consequences of the past six months as it relates to habits, health, or your working conditions. Of course, this realization could prove uncomfortable, and you may well be upset or unhappy about what this moon illuminates.

In that case, take heart. Dissatisfaction is the greatest motivator of change, and you’re bound to attract a few offers around this time that would transform your situation into something that works for you.

Making a change could be difficult though, especially after the 5th. From now through the rest of September, Mercury is traveling through your sign which could make you way too accommodating of everyone else’s opinion. Try not to get so tangled up in seeing every side of the situation; it’s better to be assertive about what you think so you don’t fall victim to unfavorable negotiations.

As long as you can actually decide on a resolution, the conclusion is sure to be fair and just. Don’t be afraid to tap into your creativity and try something no one else has.

Your ruling planet Venus enters fiery Leo on the 6th. This is a great time for group activities or a bit of partying – anything that turns up the heat in your eleventh house of social circles. Over the next couple of weeks, you also have a great chance of meeting an important someone through a mutual friend or networking connection.

Even if you aren’t looking for a special connection, you’ll soak up the adoration that falls into your lap. Just don’t overstate your feelings simply for the dramatic effect. Be warmhearted, but direct.

Watch out for arguments with partners around the 9th when Mars stations retrograde in your seventh house. In fact, as Mars ducks backward through your house of one-on-one relationships over the next 8-10 weeks, you can expect both confrontation and frustration over most of your bonds.

Remember that you aren’t the only one putting in the effort here, Libra. Respect the work your partner puts in, even if the result isn’t always a shiny success. We all have to go back to the drawing board sometimes.

That being said, it might be hard to keep your words free of criticism around the 12th with Jupiter stationing direct in your third house of communication. Coupled with Mercury in your own sign, you could let your temporary disappointments slip out in a less understanding way than intended. The good news is you’ll find it much easier to be pragmatic and structured through the rest of the year.

Instead of lashing out, you might withdraw instead, particularly around the New Moon in Virgo on the 17th. Or, maybe you’re just channeling that energy into your own ambitions. This lunation trines hardworking Saturn in your fourth house of home, so redecorate your space if that’s what you need.

When Juno enters your second house of earned income, your commitment is being tested. Look at how you rely on others to achieve your sense of self-worth.

The Sun enters your own sign on the Fall Equinox – a harmonious moment when day and night are perfectly balanced. From the 22nd forward, vitality and creative life force supercharge your first house of identity so your fairness, grace, and diplomacy can really shine. Give yourself the opportunity to appreciate the beautiful things in life, whether that means taking a friend to an art museum or snagging a couple of concert tickets.

Sprucing up your own appearance with a fresh twist makes it easier for you to find peace within.

On the 27th, Mercury enters secretive Scorpio to take you deep into your concept of self-worth. The upcoming four weeks or so are all about digging beneath the surface to face your true values.

Although it’s rarely mentioned, Saturn is exalted in your Libra, and it seems like the karmic Time Lord isn’t nearly as harsh on you as other signs. When he stations direct in Capricorn on the 29th, you’re better able to put in the work and balance the scales of your personal life through the rest of the year.

Moving into October, it’s important you give yourself permission to cherish your intrinsic worth. After all, that is what Libra season is all about!