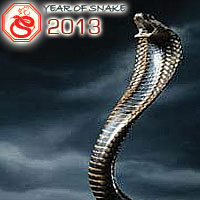 Yearly Horoscope 2013 Year of the Snake

2013 is the year of the black Snake begins on February 10th shortly after the New moon in Aquarius, the humanitarian of the zodiac. This 2013 year of Snake is meant for steady progress and attention to detail. Focus and discipline will be necessary for you to achieve what you set out to create.

The snake is a studious creature. Preferring quiet predictability to ruckus and mayhem. Peaceful solitude is also a Saturn preference. It's not surprising that Saturn has such a strong influence during the year of the Snake.

In 2013 horoscope Saturn is in harmonious relationship to Mercury, planet of communications; Neptune, our connection to the cosmic whole; and Chiron, the wounded healer. The Trine is a supportive aspect, an aspect of past earned easy situations. A blessing, also known as Grace. But Saturn is still into hard work. It's heavy even when it's good. A new-found ambition to greatness will inspire you to be all you can be, and provide you with the follow through to actually achieve your goals. Saturn knows how to take on responsibility. And, the year of the Snake also supports added responsibility,

During the 2013 Snake year be prepared to feel like you are on shaky ground. Not quite settled. Uranus is active this year and likes to shake us out of false realities with sudden shocks- lightning bolt change can occur when Uranus comes out to play. Out of the blue realizations create major change. Mars is just itching to go through all this. It makes for super tense times. But also creates movement and growth.

Be extra careful with your work this 2013 year of the black Snake. Signing documents of any kind requires very thorough attention. 2013 horoscope predict it is a good year to begin important detail work. Research and investigation are supported. The Snake has sneaky energy that can be to your advantage. Look for the holes in the loop.

Deep transformation and healing are often represented by the Snake. Moreover according to general 2013 horoscope Pluto exposes what is hidden through a deep revealing of subconscious material. Slowly we begin to see the reasons for things, we understand the root cause of some dysfunction. Just like the snake, slowly we shed our skin. We become shiny and new as we acknowledge and release the past.

Create a safe space to work from this 2013 year. The Snake likes protection, needs to feel safe and secure to utilize its special analytical skills. This is the year to make headway in slow and methodical ways. Saturn will assist this effort as well. Things will definitely be accomplished as you focus forward.

There is no need to put yourself out there. Consider this 2013 year to focus within. You won't be drawn to social situations as you are more interested in serious progress not superficial chit chat. Allow yourself withdrawal as it is necessary to self reflect and ponder situations.

Celebrate the 2013 year of the black Snake with dark colored clothing. Honor this transformative beginning with a day positive thoughts. It is tradition to place a pine twig out to represent the Snake. In mythology the Snake often represented healing of the physical body while shifting to a more spiritual outlook. Expect a true release of past blockages this 2013 year. A great deal of quite progress can be made in the 2013 year of the Snake with the help of the planetary energy. Slow and steady wins the race in 2013 year of Snake.

The Chinese New Year 2013 of the black water Snake