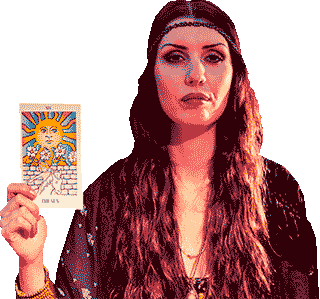 The tarot is divided into two categories: the Major and the Minor Arcana. The Major Arcana represent powerful forces that shape the lives of humans, such as Justice or Judgement. Put together, these 22 cards represent the archetypical life’s journey, from the innocence of The Fool all the way to the well-rounded wisdom of The World.

Wisdom can be found everywhere. Some look for it in dusty books, others sit at the feet of knowledgeable scholars and wait for crumbs of wisdom to drop down into their waiting mouths. For centuries, many have sought wisdom in the cards of the tarot.

The origins of the tarot are somewhat obscure, although historians have traced them to a set of cards favored by Italian aristocrats in the 1500s called “tarocchi.” Many of the images we see on the modern tarot, such as the court cards, derive from this deck. Throughout their evolution, versions of tarot cards were used for education and even game play in addition to their divinatory meanings. As the centuries passed, more and more diviners began matching the ideas of the Tarot to ideas from mystical traditions such as the lost tradition of Egyptian magic contained in The Book of Thoth, the Jewish mystical tradition of Kabbalah, and various European mythologies. The history of tarot encompasses a multitude of decks, some of the most famous being the Rider-Waite and the Marseille deck, that may have slight variations in meaning and imagery.

The tarot can act as a gateway to these other traditions of mysticism and its history is truly fascinating. However, if you decide that it is all too confusing or not useful to you right now, you can disregard the history entirely and focus on the cards as they exist in your present. You can choose to work with one of the traditional decks, or one of the myriad modern ones centered on various themes, from world mythology to animals. You can draw on the tarot’s traditions as much as you wish, but it does not define your path with the cards.

At the beginning it was said that wisdom can be found anywhere, even in a pack of cards. This is true, and there are great insights to be found in the 78 images that make up the tarot. However, the greatest strength of the tarot is its ability to point you towards the greatest source of wisdom of all—your own inner self.

Despite the common misconception of the tarot as a simple fortune-telling gimmick, most readings are not straightforward as “you will be swept off your feet by a dark-haired man at 2 p.m. next Tuesday” (although sometimes the insights the cards offer are direct as a punch). The tarot is especially useful for identifying hidden patterns which govern you that you either cannot notice under the noise of your daily life or are choosing to ignore. It may seem as if the cards are interpreting the future, but sometimes they are only pointing out patterns in the present that are setting you up for clear consequences. At their best, the tarot cards force you to look beyond your usual stories and excuses and identify the thought patterns that drive you, allowing you to change what is necessary in order to progress.

Free Online Tarot Reading using Famous Universal 6 Card Spread from Major Arcana. It is mostly like a snapshot of how things are. The simplest and the most useful reading to get a glance at what is going on around you at this very moment.

This is a Tarot classic, it is one of the oldest spreads practiced with the help of Tarot cards. It is useful for beginners and for those who use Tarot for decades. The Celtic Cross spread may help understand where you are now and the possible outcome of your current situation. There are always clarification cards that make clear the forecast from different angles.

Maintaining a constant dialogue with subconsciousness and our inward direction is a matter of habitual practice and consistency. Have you been split between 2 possible actions? Look no further the three Tarot card decision spread is just what you need to solve this confusion.

There are a huge number of this sort of Tarot card spreads. If you are a beginner then you probably think that every Tarot spread should be outcome spread in some way. It is quite right, still, even the simplest Outcome Tarot card spread might be as profound as the universe itself.

This Tarot card spread is helpful when the enamored person feels a sense of urgency or perceives a need to take some actions following the object of his or her attention. The love might be cruel, it is better to have a way to sort out all uncertainties.

The Save my Relationship Spread

If there is something going wrong in your relationships then the Tarot spread Save my Relationship could be the answer to your worries, uncovering the core of the problem. This Tarot card spread also is helpful when guidance is sought on any relationship issue.