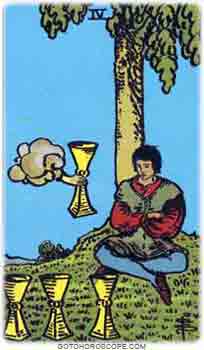 A youth of pubescence in his years sits on a green under a tree in bright gay colours of green and red. His arms crossed about his breast with a sober countenance. His gaze is fixed upon 3 upright chalices. He sits at a distance from them as if they mock him. There is at once a hand extending from the only cloud in the sky that holds a great chalice. It is just for him. A gift that will let him overcome the thought of the others but he does not take it.

Beyond mere sleepiness, there is a level of exhaustion that seeps into your very soul. A kind of bone-deep weariness that turns every taste in your mouth sour, every flower in your garden gray, and makes everything that once brought you joy feel insignificant.
The Four of Cups represents this weariness so deep that it causes many people to disconnect. After suffering many disappointments, it is difficult to maintain hope or connection to the world. You are going through a period of apathy, where nothing interests you any longer. Perhaps the workings of the world even disgust you. You have tried for so long and earned nothing but bitterness for your efforts, even the sweetest reward promised seems poisoned.
However, the Four of Cups is a warning to examine this detachment. Maybe the slights of the universe against you are not quite as heavy when weighed with an even scale. Or, your detachment and revulsion for the world around you is masking a secret fear. It is easier to claim that you no longer care about your goals than to face the possibility of failing if you try again. Do not let yourself sink too deep into this bitter detachment.

After a long period of despair, you are finally feeling some hope. However, this hope is not one granted randomly by the universe, but a hope that you fought out through your own efforts. We do not always have control over the circumstances that cause our emotions, but when the possibility is there, choosing happiness is a radical thing.
The Four of Cups reversed represents the power of your own psyche to end despair. You do not have to forget the misfortunes that caused you grief, but you can choose to accept the past and find new ways to move forward. Perhaps you have recently realized that your situation is not as bad as you thought and that you can find a way out. Congratulations, resisting the temptation of self-pity is a difficult battle.
Once you clear away the rotting cover of apathy and bitterness, you allow new things to grow in your life. Be ready for new relationships or opportunities that make you dizzy with joy and happy omens. Do not be afraid to grow.