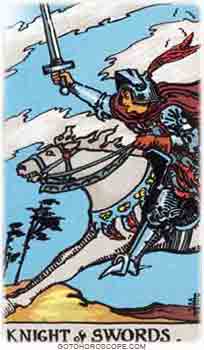 A knight rushed forth on a white steed. His speed bends the landscape opposite his trajectory. He is relentless in his travel. He comes wielding a sword raised in a battle pose in his right hand of manifestation. His countenance and that of his horse is that of determination. He moves in a flash and departs the same. A long banner attached his visor warns those who notice of his arrival. The color is red and that of his cape. He comes with a swift and determined message

The Knight of Swords is like a person you may know that you want fighting for you, but you would die of fright if you had to fight against them. Their fierce nature is something to behold. The card is full of wrathful, impulsive energy. Woe be to those that stand between the Knight of Swords and his goal. They are full of action and righteous anger, and have the skill in battle to defend their beliefs.
The card could also be a sign that a time of strife is coming. This may not take the recognizable form of armies meeting on the battlefield, but your ambition could come across blocks as you proceed along your way. Keep your eye on your goal and do not be afraid to use direct means in order to cut through your obstacles. Although the card represents war and conflict, it is righteous conflict driven by a desire to protect one’s values or that which is important to you. Do not shy away from direct action or ambition when they are needed.

The Knight of Swords upright is a powerful foe because their warlike spirit is driven by righteous defense of that which he holds dear. The Knight of Swords reversed represents aggression for aggression’s sake. This is a person who will leap into battle because they chase the high of beating down others, without even caring about the cause that’s being defended. Ask yourself if the perceived slights you are reacting to are really so grievous, or if you just find pleasure in flying into a rage?
The Knight of Swords reversed is driven by impulsivity. They leap into action with no second thought and take an almost perverse pleasure in defying the expectations of others. Take this as a sign to think about your actions, otherwise you may find yourself facing unexpected, yet completely predictable, consequences that you cannot fight your way out of.
The Knight of Swords reversed represents an excess of emotion, an excess of impulsivity, extravagance that is just as damaging as gluttony or sloth. Beware of those around you who are too quick to draw you into fights and beware of these qualities within yourself.