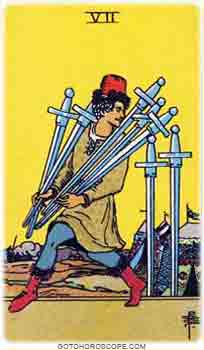 Attempt, hope, betrayal, deception, getting away with something, quarrelling

A gypsy encampment in the distance and a male figure in meager clothing with a tribal cap denoting his origine carries seven swords in his arms. All the while his glance is back over his shoulder and his gate is soft and stealthy. He hopes he isn’t discovered coveting the wares of the people in the camp he just pillaged.

The Seven of Swords represents a hustler, a huckster, a cheat. Beware of silvered tongues and lightning-fast fingers, hold your trust close to your heart as you move through the world for the time being. What may seem like an innocent interaction may really be a deftly laid trap, seeking to lead you astray to serve the purpose of others. For now, it may be prudent to move through the world with caution.
The clear, piercing message of the swords could also be an invitation to look into the mirror. Are you the one who is trying to swindle others or deceive them as to your true intentions? Ask yourself if this is who you really want to be. If that is not a compelling enough reason to change course, remember that most frauds are eventually exposed to their own embarrassment.
An alternative reading of the card invites you to think more strategically in your approach to the world. A change in tactics is not actually deception, even if you may be accustomed to following rules to the letter, and can help ease your burden.

The deceptions indicated by the Seven of Swords are turned inwards when the card is reversed. What stories have you been telling yourself about your own capabilities? If you have been consumed by doubt lately, what evidence do you have that you actually are incapable of all the things you wish to do, but think you can’t? You are your own worst trickster, not swindling yourself out of money or power but out of potential and happiness.
The Seven of Swords reversed also offers a ray of hope. You are rethinking your attitude towards life, changing your tactics. Now is the time to examine your beliefs and discard those with no basis in truth and those that do not serve you. Let go of your feelings of inadequacy, the facades you have put up in front of your authentic self, and the friends whose stories keep stretching beyond reality. After a long period of deception, from yourself and others, you are finally moving towards truth.