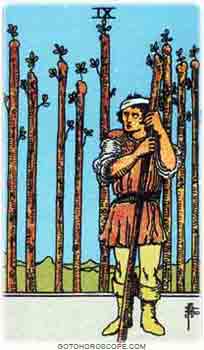 A battle scarred man with a brow adorned with no more than a bandage. His countenance is weary. He holds only one wand, though flowering, he seems to be unmoved by the fertility and possibility it offers. He enforces only his own protection with eight more wands set across the background and a tired but vigilante gaze as if to expect more of the same trouble.

Bloodied, full of sweat, but not broken, the Nine of Wands stands tall against its opponents. This card does not have an aggressive energy, but it is fierce when it comes to defending its rights. You are a fighter. You are full of grit and do not hesitate to lay everything on the line in order to protect what you have worked for, even when it seems like the whole world is against you.
One of your strongest qualities is your perseverance. Enemies may call it stubbornness, but there is no spite behind your dedication to defending that which is yours, simply a strong sense of right and wrong. You make a truly worthy and formidable opponent.
However, just because you are good at fighting for your own does not mean that every fight is a necessary one. Perhaps you have taken offense too easily at a perceived slight or the problem can be worked out through more gentle means. There is no shame in ceding now in order to win your battles later. If all of your energy is tied up in fighting, then you have none left over to work towards your goals, causing delays in necessary developments.

The Nine of Wands Reversed has exhausted all of its fighting spirit. Its enemies have finally won. Its spirit has been beaten down.
You may be feeling as if you cannot go on anymore. The calamities and obstacles put in your path have exhausted you and you cannot see a way out of your situation or muster up the energy to try and break free. The card sees your exhaustion and understands it.
However, the obstacles placed in your path may be an opportunity. If you are feeling as if you have no more motivation to fight, perhaps that is a good thing and it means that it is time to try a different way, a more gentle way. Now is the perfect opportunity to change paths before exhausting yourself further. Deciding not to fight any longer is not a sign of weakness but the sign of an intelligent player.