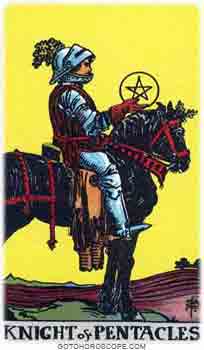 He sits upon a black steed holding a pentacle in his right hand of manifestation. He is still. There is no motion in the atmosphere around the dark Knight. He is steady, fearless and slow moving. He is diligent in his character as depicted in the dark and ominous armour. His horse is black with red bridle and stands with equal character as his owner.

There are few songs written about the Knight of Pentacles. He is not the slayer of dragons and rescuer of maidens, he does not commit daring deeds and reckless gambles. However, the Knight of Pentacles is the one who brings the most reliable good into the world. Where the knights of song are unreliable and sometimes cruel, he is responsible and even-minded.
You have learned that the best way forward in life is through hard work. You are not ashamed to admit that you are a creature of habit, but you know the power of a routine to help you achieve your goals. You are reasonable instead of rash, ruled by your intellect instead of emotion.
These practices have served you well, but another aspect of the Knight of Pentacles that you may want to consider is the card’s conservatism. Held back by his own rigid beliefs, the Knight of Pentacles plods on. He may reach his goals, but the journey has no life to it. Perhaps you may consider shaking up your routine a bit if you find that this last interpretation resonates a little too uncomfortably.

For all the glorification of the power of hard work in society (and in the suit of Pentacles), the Knight of Pentacles reversed exposes the flaws within it. You may be feeling stagnant, as if your work is not yielding the rewards that you were hoping for. Perhaps you are finding that your obsession with work is making you unhappy and your quest for completing each task perfectly is depleting you of energy that might be used for another pursuit. Or maybe, despite convincing yourself that you are fine with an orderly life, you may find that you are—bored.
The Knight of Pentacles reversed is suggesting that there is an excess of work in your life, or at the very least an excess of work for the wrong reasons. Now might be the time to take a break not just to relax but to reevaluate what it is that you are working for. Do you really need that promotion or that extra money? Could you be spending more time with your loved ones instead of on the grind? Maybe you were using work as an excuse to avoid self-reflection, which can often be scary, but now it’s time to reevaluate.