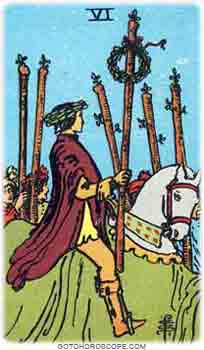 A regal figure atop a royal white steed, himself adorned, rides into a rallying crowd as if to greet him. He is a hero. His head sits a crown of greenery, his mantle red and flowing. The wand he carries decorated with a wreath of greenery signaling that the kingdom is saved and victory is thine.

The Six of Wands heralds good times, like a parade of messengers in ancient times trumpeting the news of victory. Times of hardship are over, it is now time to celebrate. A great victory has been fought for and achieved.
You are starting to see all of your hard work pay off. Your optimism has been well-founded and you can continue hoping for better things in the future. You are also starting to see your achievements praised publicly. Tamp down the humbler sides of your nature for a moment and allow yourself to bask in this praise. You have earned it.
Do not be embarrassed to take time and rest on your laurels. Your work has been endless, but what you have accomplished is worthy of celebration. Moments of joy are just as necessary as moments of toil, for memories of joy are the fuel that guides you during difficult times.

The Six of Wands reversed signifies hopes dashed under the heel of cruel fate. Instead of celebration, you are facing punishment. After all your hard work, even more trials await you. Perhaps you have been the victim of a betrayal, where someone has taken credit for your work and passed it off as their own or spread false rumors about your character. Instead of being recognized, your accomplishments are ignored.
It is easy to let these difficult situations make you bitter or pessimistic. Perhaps you have already begun to give in to pessimism or fatalistic thinking patterns. However, allowing even your very hope to be defeated will only make it harder to work your way out of this current situation.
You may be feeling hard done by, but now is a good time to reevaluate why you are so disappointed. Why were you expecting praise that you did not receive? Perhaps you were overly confident and your boastful nature has blocked the blessings that were your due. Going forward, make sure that your values are governed by internal happiness and not just external praise.