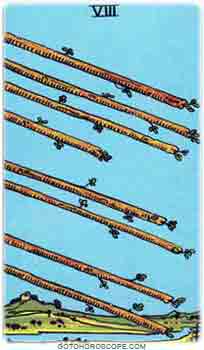 Eight flowering wands of fertility fly across a baron, desert landscape of rock and mountains devoid of greenery. They speed through the air bringing news of a fertile future.

The passion of the suit of Wands comes to a dizzying height in the Eight card. The Eight of Wands moves swiftly and with great haste. It is a time of great motion and commotion, of various happenings pushing the wheels of life forward.
You are surrounded by an intense form of energy that is propelling you towards your goal. At times, you may even feel as if you could be pulled under the current! Do not worry, if you maintain focus on where you are trying to go, you can channel the energy of the Eight of Wands towards your goals and achieve them swiftly. Be ready to fuel yourself from the hustle and bustle around you.
If you are hoping to achieve success in love, the Eight of Wands is an especially good omen. According to some interpretations, this card stood for Cupid’s arrows that made people fall in love. You are on the brink of a dizzying beginning to a relationship or infatuation. Be sure to take advantage of the opportunities that will present themselves to you—life may move too quickly to deliberate too much.

Speed for speed’s sake will not get you where you need to go and will only lead to exhaustion. Reversed, the Eight of Wands’ energy becomes overwhelming. When you are busy with no end or goal in mind, it may feel as if your period of hard work will never end. It is easy to become discouraged and feel as if there is no light at the end of the tunnel. In order to fight this feeling, you must focus your efforts and remember why you are here in the first place.
Alternatively, the Eight of Wands reversed could symbolize a time of anxious waiting. You can feel that the energy is there, but you are hesitant to take charge and use it. Prolonging your situation will not make you feel any better, it will only make you more panicked.
Finally, while the card upright represents the arrows of love, they sour when the Eight of Wands is reversed. The passions of first love can easily turn to jealousy and fighting when they are not tempered with maturity and communication.