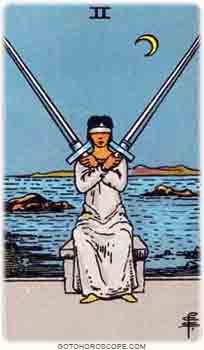 Conformity and the equipoise, difficult decisions, weighing up options, an impasse, courage, concord

A raven haired woman dressed in white, sits on a stone seat on a beach with her back to the ocean. The rocks and sea have a calm essence. She is not acknowledging its existence. She is blindfolded and holds two swords cross breasted. She is still and refuses to do much else but breathe lest she die. Her lack of decision about her movement keeps her at her perpetual station.

The Two of Swords is at a crossroads. They are not moving in one direction or the other, they find movement in either way frightening. Instead, they are trapped, right in the middle.
You might be going through a period where you know that you must make a difficult choice, but you are finding it impossible to do so. Perhaps you are feeling the pressure from those around you or from societal norms to choose a particular path, even though everything within you is screaming to choose otherwise. Perhaps you feel powerless to make a choice, knowing that either way the consequences you must face are significant.
However, the Two of Swords is asking you to examine the circumstances that are keeping you in this stalemate. Your internal blockages could be even more powerful than whatever forces are working against you externally. You could know the choice you need to make, but lack the courage to do so. Or, you are secretly relishing in the role of the martyr. Now is the time to put down your blockades and choose a path. You cannot sit at the crossroads forever.

The road indicated by the Two of Swords reversed is far more murky than when the card is upright. With the Two of Swords, there is a clear choice going forward, only something is blocking you from making it. Here, there does not seem to be a right choice. It may seem as if no matter what you do the consequences can be dire, the best that you can hope for is to minimize the harm.
The Two of Swords reversed is also indicating a time of confusion for you. It is difficult to decide the right choice when you have not been given all the information. Perhaps you have been relying too much on others even though their motivations are questionable, and now it is time to go in search of the truth yourself. The way forward will be difficult, but be sure to believe in your values and to guard your trust like the precious thing that it is.