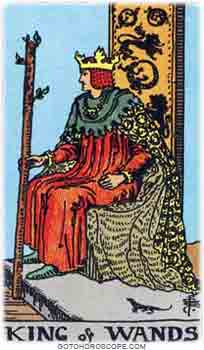 He is regal upon his throne. A salamander, a symbol of fire at his feet looks up as if to await the word of its master. A flowering want he holds strongly before him as he looks outward in survey of the land that is his kingdom.

He wears a robe of red and a mantle of fertile green and atop his head a crown of gold. Behind him is his wall of lions, the symbol of valor, strength and leadership.

The King of Wands represents visionary leadership. The visionary may not be the one to come up with an idea, but they are the ones that are in tune enough with their creative energies and possess the strength of will to see a plan through. The King of Wands leads by example: after seeing his ceaseless efforts towards a goal, others are inspired to do the same. However, because he is so accustomed to pouring all his energies into a project, The King of Wands may find it hard to understand why others cannot do the same. Patience is not one of his strengths.
If you are looking for answers about a specific person, the King of Wands may represent someone in your life who inspires you, someone that makes you envision new possibilities, even frightens you a little bit with their drive.
Alternatively, the King of Wands represents your own capacity to lead, whether you realize it or not. You have the strength and will to take the lead on a project or relationship. Dig deep and find your own inspiration, and that will help you inspire others to follow you.

Where the King of Wands upright represents a visionary leader, the card reversed represents a failure of leadership. Perhaps someone who was supposed to step up and take initiative has not done so, which has thrown the whole project off balance. Or someone who has been a wonderful leader before has lost his touch. He is drained from his ceaseless work and wants freedom from his responsibilities.
Taken to its extreme, the King of Wands’ leadership becomes domineering. Just because you have a vision about how something must be done does not mean that is the only way to do things. Are you taking into account the views of others, or the facts around you? It may be time to create more realistic goals. When the card is reversed, the King of Wands’ passion becomes tyrannical. Passion about a goal does not excuse treating others unkindly.
Turning up The King of Wands Reversed in a reading is a nudge to reexamine your leadership style, or to be aware of who is leading you. Passion and will alone will not achieve a goal, you also need patience and temperance.