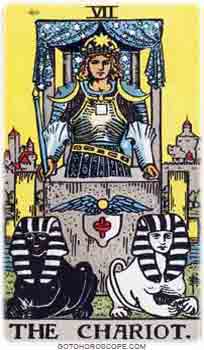 A charioteer stands at attention in his chariot, strong and in waiting of an order. His drivers are two sphinxes, one black and one gray. His right hand holds a green scepter tipped with gold and his left rests casually upon the stage of the chariot in a receptive pose. He is garbed in green traditional charioteer form. His breastplate is usual but two silver, white crescent moons rest atop the front of his shoulders.

A crown of stars, one impressive star with smaller ones atop a green band resting on his wavy blond, flowing hair. His symbolism is akin to the Empress. His canopy is adorned with stars on a green mantle. Green wings extending from a disc above a personal symbol adornes the front of the chariot.

He sits in waiting on the green at the gates of a great kingdom behind. Could be two kingdoms of which he must make a choice and be ready for swift movement.

The most powerful armies in ancient times were powered by chariots, forces to be reckoned with. In the tarot as well, The Chariot represents power. Just as the charioteer is able to commandeer animals to his will, and make no mistake it is no easy feat to direct several tons of flesh, the card represents the ability to change a situation through the force of will.
The Chariot represents victory, plain and simple. Whatever endeavor you are seeking guidance in, you will succeed as long as you maintain focus on your goal and resist the challenges that are put in your way. You get to decide the direction your life will take from now. You get to maintain control over the situation, no matter how complicated, that you find yourself in. If the discordant forces that are working around you will not find an agreement, you will force them to work to your benefit through pure force of will.
Do not falter now. With providence at your side, The Chariot will take you to victory.

The weak-willed charioteer’s team will easily throw him to the ground.
The Chariot reversed represents loss of control. Without a clear sense of direction, the opposing forces united by The Chariot are pulled apart again. Without clear guidance, the army around The Chariot collapses into quarrels and disputes.
Perhaps The Chariot Reversed is pointing you towards the source of any failures you may be experiencing. If you are not clear about your intentions and decisive in your actions, the complicated projects you take on will not reach completion. You need self-discipline in order to succeed.
Even good charioteers experience falls, but it is only the great ones that pick themselves up again. The Chariot Reversed invites you to take time during your setbacks to reevaluate your path. Perhaps your failure to take control is a sign that subconsciously you are set on achieving a different goal. When you pick yourself up, you can change direction.