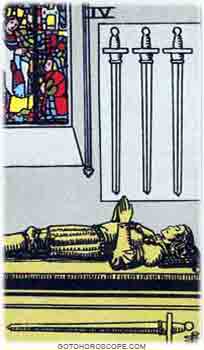 A gray figure lay face up on a stone slab. He is alive but still as grim death. His hands above his waist in a prayer position and four swords, three above him on the wall and one lay under him lengthwise. He collects his thoughts. His armoured dress speaks of battles and he is battle worn. A stained glass window above his feet is a reminder that healing will bring him strong to the field once again.

In many decks, the Four of Swords is represented with a tomb. This is a quiet card, one whose silence is almost hallowed, like the hushed atmosphere in a cathedral or graveyard. While this card does not represent death, the image of the tomb is interesting as many of us are deathly afraid of turning inwards. The modern world offers many distractions, from technology to endless entertainment, that allow us to ignore the thoughts that frighten us.
However, this card is telling you that it is time to turn inwards. Dedicate time to meditation and really discovering yourself. You may be afraid of what you find, but knowing yourself will help you prosper.
The endless hustle and bustle of the world that you cling to is also exhausting you. This is an invitation to really disconnect and take time to rest. Only after true relaxation will you be able to attack your goals with all your energies later.

The Four of Swords reversed represents a period of stagnation, a period of detachment that was undertaken for the wrong reasons. You may be telling yourself that you are engaging in self-study and contemplation in order to achieve your spiritual goals, but you are choosing to remain here because it is easier than doing something else. Perhaps it is time to rejoin the world, you can always balance meditation and your daily routines.
Alternatively, the Four of Swords reversed is warning you about what happens when you neglect to give yourself periods of rest. You are steadily approaching a time of deep exhaustion, if you have not reached it already. You may be telling yourself that you need to keep working for whatever reason, but your productivity suffers when you do not take the rest you need. Our bodies have ways of shutting us down and forcing us to rest when we really need it, but do not push yourself to that point. Disconnect for a day or two, and you may not even recognize yourself on the other side.