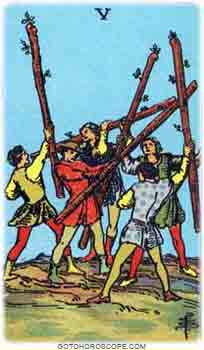 Five men in Tunics of green, white, sage and saffron. One in the forefront with a yellow cap signifying status all wielding wands toward each other though their countenance is not of aggression but of practice and an almost playful flirtation; but a mock battle they stage displaying their skill to onlookers.

If everybody got along perfectly, the world would be nicer but not very realistic. The Five of Wands shows us that conflict is a necessary part of life. Tensions and disagreements arise between people because we are all opinionated and different, but their resolution can be an opportunity to find a new, better way of doing things. Through conflict, we are able to gain advantages and learn valuable lessons.
You may be facing a time of conflict and it is time to meet it head on. Conflict is a valuable teacher. You learn the value of your own positions and choices best when you are forced to defend them from others. Through conflict, we are able to build strength. Conflict is also a tried-and-true way to find out who your real allies are. The honest opponent is better to have around than the worshipful ally who praises you with one hand but steals your ideas with the other. Sometimes imitation is the highest form of flattery, but just as often it is sabotage.

Conflict can be a source of growth and opportunity, but as the Five of Wands reversed shows, it can also breed resentment and more fighting. An honest opponent helps you become better by testing your strength and acknowledges the value in your mutual struggle. A dishonest one does not care about trampling on you or the principles of integrity to get where they want to go.
The Five of Wands Reversed could be warning you about a deceitful person around you. Do not go into the arena thinking that you are in earnest conflict against someone who has two knives ready to slide into your spine. Be prepared to deal with the dishonest person and the poison that they leave behind. Seeing others blatantly break the rules inspires resentment and bitterness in you and others around you, and that bitterness takes time to cast out.
The Five of Wands reversed could also be warning you that deflection will get you nowhere. Do not give in to fear or underestimate your own powers. Perhaps it is your opponent who should really be afraid.