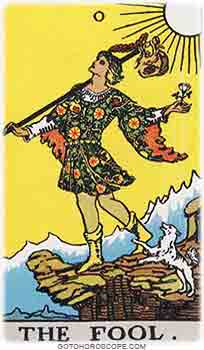 His head and posture face upward with the confidence of the sun that shines behind him. It seems to follow him wherever he be. His only companion, a dog, loyal and gay as he followeth the young fool. Androgynes in his countenance and full of innocent arrogance he travels forth, but alas he seems unfettered by the cliff that he moves gracefully toward. His dog, giving no alarm but a smile to his seeming impending doom, for one misstep and he be vanquished! The canine’s faith in his master is seen in his expression.

Ah, but alas he is unmoved and continues the fool’s journey with his scant belongings in a pouch on a stick. A frock covered in symbols of nature and fertile pomegranate fruit. The mountains behind him in a distance are covered in ice perhaps the past he’s left behind along with the lessons. The cliff beneath him is fertile and punctuated with a fresh white flower he holds in his left hand.

Those who ignore the wisdom of the fool do so at their own peril.
What the world mistakes for naiveté is merely optimism and energy, the fool’s belief that the road will rise to meet him as he embarks on his life-changing journey. The fool’s ignorance of the way the world works functions as a sort of freedom, he is free to forge his own path. Along the way his optimism may be tempered as he learns more about the dangers that await him, but every successful voyage starts with a healthy dash of optimism and daydreaming. The Fool starts off our major arcana, our tarot journey, and in your life can mean the start of a new journey as well, metaphorically or literally. The Fool is also a reminder to temper your own cynicism with childlike innocence, to free yourself from preconceived beliefs, and to welcome the wisdom of the world with both arms.

When taken too far, The Fool’s inexperience veers into ignorance. Misplaced optimism becomes gullibility, The Fool is easily taken advantage of by those more worldly than him. Youthful inexperience, when not tempered with humility, becomes arrogance. Are you taking a leap of faith or a leap off the edge of a cliff? The Fool reversed warns us to examine the consequences before making a decision or embarking on a new journey. Have you thought about the consequences of your actions on others? The Fool reversed has not, and it is one of his weaknesses. Tarot, like life, is about balance. The Fool reversed serves as a reminder to balance optimism, faith and freedom with awareness about one’s place in the world and reason.
Alternatively, the Fool reversed means that you are struggling to walk the path of the Fool. Your fear is holding you back from an important journey, and you may not even realize it. You may be rationalizing away your reasons for not making an important decision, when really you are afraid of the unknown. The Fool reversed is an invitation to rebalance, to find equilibrium between worldly knowledge and innocent faith.