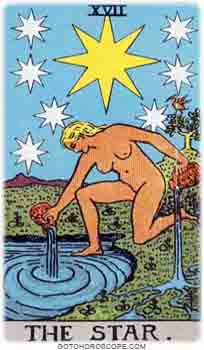 A lush and fertile background of greenery is shone upon by a great star and her sister stars that light the way to the river of dreams. The lady of flaxen hair, naked with one foot on the Earth and one in the river and replenishing the Earth with water from a vessel symbolizing the womb of creation.

She lay her hopes and wishes onto the ground as she creates alchemy with the vessel in her right hand of manifestation. Here, she adds her emotion in an alchemical way to manifest with faith in the outcome and flows like the river with the uncertainty of the outcome.

You have gone through a great many trials in your life. The Star is your reward. This card represents hope and rejuvenation. You have traveled a long way, take The Star as a sign to rest and bask in all that you have achieved. You have the power to thrive even more. Have faith in yourself and in the universe.
The Star also represents true wisdom that can only be achieved from inner calm and knowledge. The card is free from burdens such as self-consciousness and shame and is able to devote its energy towards discovering higher truths. It is imploring you to do the same. Let go of your insecurities and your anxieties. It is time to rest, secure in your own knowledge.
Finally, The Star represents absolute freedom. Not only is the card free from the buffeting forces of fate and destiny, it is also free from inner turmoil and base impulses such as passion and violence. This card is a happy omen indeed. Good times are waiting.

The freedom of The Star does not come without putting in the necessary work first. Unfortunately, The Star reversed signifies that the groundwork has not been laid yet. Instead of achieving The Star’s careless freedom, you are still ruled by impotence and fear. Your own insecurities are preventing you from taking the crucial step towards enlightenment and finally achieving the healing power of hope. What do you have to lose if you let go of your shame?
You are letting your own negative thoughts cloud your eyes, poisoning your mind with discouragement and a lack of faith. Trust in your own capabilities and the mysteries of the universe. In this case, fear can only breed more weakness within you.
That peace you are seeking is within reach, if only you can open your eyes and really see it. Take a leap of faith and do not listen to the voice of fear in your head, no matter how hard it tries to disguise itself as the voice of reason.