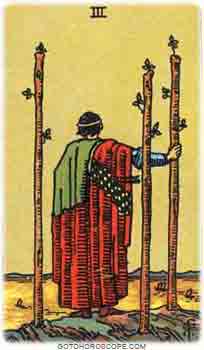 A man draped in red and sea green with a sash from shoulder to hip and a crow of leaves in a military garb stands on a rocky precipice. He holds one flowering wand in his right hand of manifestation, his left is hidden for his back is to the land. There are two more wands a distance apart behind him stuck in the ground. His gaze is fixed outward to the sea maybe awaiting his voyaging ships?

The Three of Wands is reminiscent of the merchant princes of olden days, men who conquered worlds while barely leaving their doorstep. This card embodies the spirit of exploration, the desire to try something new and to take a risk in order to achieve far greater rewards than the ones that can be found on the well-trodden path. However, this exploration is coupled with a spirit of detachment, referring to one who makes plans for the journeys but does not embark on them himself.
This card in a reading is a fortuitous omen for your own ventures. If you have been thinking about expanding your business ventures or taking on a new responsibility, now is a good time to do so. You are already working from a position of relative strength, your hard work has given you a good base for further expansion. It is up to you to take advantage of it.
The spirit of exploration heralded by this card is not one of the reckless adventurer but the meticulous planner. You are not driven by lust for adventure or earthly passions but by rational calculations. Maintaining a spirit of reflection will help you complete the most complicated endeavor.

All ventures have an element of risk to them. The Three of Wands Reversed unfortunately represents failed explorations. Perhaps your careful inquiries have been met with a resounding no or a door slammed in the face. Your investment has failed, taking some of your money with it. You have problems, but not solutions.
It is normal to experience setbacks. No true great achiever forged their victorious path without meeting some obstacles along the way. However, that does not mean that this current fog of confusion is pleasant, especially to someone who is accustomed to being in control. Sometimes, you cannot bend the whole world to follow your plan and it is easier if you accept it instead of giving in to bitterness.
These setbacks do not have to be permanent, an end to your troubles could be in sight. However, do not let your negative experiences affect your innovative spirit and desire to explore. A fear of innovation will set you back. True discoveries are rarely found close to shore.