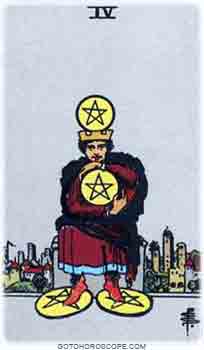 A man who appears to be a king with a golden crown and a prospering city behind him sits clutching his riches as if once he were pillaged. There are four pentacles. One in both his hands, one beneath each foot and strangely, one atop his crown as if to dare anyone to make way with it.

Nobody can accuse the Four of Pentacles of frivolity. This is a card of stability, of security. Right now, you are in control of your own destiny. You may not have entered the period of fabulous riches or happiness that you are working for quite yet, but your hard work and prudence is setting you on a good path.
The Four of Pentacles is advising you to stay on that path. Continue to work with diligence, continue to stay grounded in reality as you move forward. There will be time for lavish spending and great feasting yet, but you have not secured your position just yet. Others may judge you, may say that you are staid and miserly. You know better than they do that what you are working towards is too important to throw away on mindless, temporary pleasures or on pleasing others that do not have your best interests at heart in the first place.

In their heart of hearts, very few people want to be a miser. We have all read the fairy tales and cheered for the transformation (or if they’re especially stubborn, the comeuppance) of the greedy who count their coins while others starve.
However, the Four of Pentacles reversed is indicating that despite your best intentions you are giving in to your most miserly impulses. Your greediness is causing you to hyperfocus on the accumulation of wealth, ignoring that others are in greater need than you are right now. When directly called upon to provide assistance, you delay and delay, hoping that your reserves of wealth will soon be forgotten. Your love of materialism will only give you grief.
The Four of Pentacles reversed is not judging you for your self-centered turn. Often, clinging to our financial reserves is not done out of malice but out of genuine fear of loss. Perhaps in the past you suffered some sort of financial privation, and that has traumatized you. Let go of that fear, you no longer need it (and let go of some of your material goods too).