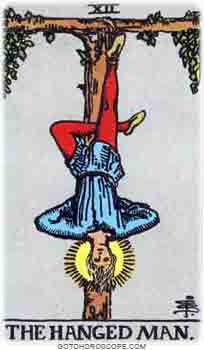 On a sacred branch he hangs over top his head with left leg crossed over right and hands around his back. He wears a blouse of green with a sash of hemp as the rope that holds his right ankle only to the tree. Crimson tights and yellow foot coverings.

His head is covered by a cloak of light so as to take the divine wisdom he seeks. In doing this he sees the world from a different place.

At first glance, the Hanged Man may seem like one of the more grotesque cards in the tarot. However, he is not there because of some punishment but because he chose to take up this uncomfortable position willingly in order to achieve some higher goal. As such, the card represents willing sacrifice and martyrdom as well as surrender to what is necessary. Perhaps you as well need to pass through a period of discomfort or even pain in order to achieve what you want.
From Buddhism to Norse mythology, spiritual traditions recognize that the road to truth often comes through intense personal sacrifice. The Hanged Man is in his position because he is seeking wisdom, new perspectives, perhaps even deeper occult knowledge such as the gift of prophecy. Those gifts could be yours as well, and the appearance of this card in a reading signifies that you desire them. However, they cannot be obtained without sacrifice.
A sacrifice like this is not to be taken lightly. As such, the Hanged Man invites you to take a pause and reflect on your goals. What trials can you afford to take on and what gifts do you hope to achieve?

The Hanged Man reversed may physically be standing right side up, but something within him is unbalanced. He is unwilling to take the step needed, to make the sacrifice that is necessary. Perhaps it is fear, perhaps it is simply selfishness. The Hanged Man reversed is prone to crying “why me?” Perhaps he is afraid that society will consider him foolish for making the sacrifice for a goal it does not consider important and his commitment to society’s values is the root of his indecisiveness.
However, without sacrifice it is difficult to achieve wisdom. The Hanged Man reversed is distanced from the inner truth that he needs to discover. Perhaps you are feeling the same way. Spiritual journeys are not prized in our modern society, which values money above all, but perhaps it is time to sacrifice a little of society’s approval in order to meet your own needs.
Alternatively, The Hanged Man reversed represents a sacrifice that is not needed or a martyr complex. Is your sacrifice coming because you truly believe that it is needed or because you want praise for how selfless you are?