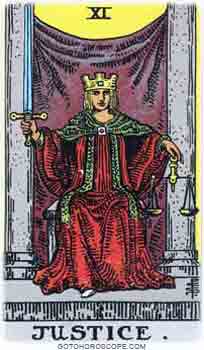 A regal lady, stern and upright. Justice without the need for a blindfold. She looks in forward gaze at all who visit her. She holds a sword drawn and pointing upward to the heavens with her right hand of manifestation. A scale resides in her left, receptive feminine hand. With this she fairly weighs your deeds and decides with swift assurity if you walk past her behind the veil.

The veil is thin behind her throne and is held by two pillars. Her robes are red with a green mantle. Her crown of jewels and gold.

Justice is one of the more straightforward cards in the tarot. Her name tells you exactly what you will get—and the card means that soon you will get what you will deserve out of life. However, in order to prepare for the influence of Justice on your future, the card demands radical, absolute honesty. You may be telling yourself that you are due some great reward, but have you really earned it? Being truthful now can stave off any unpleasant surprises when what you have sown comes to fruition.
Justice signifies a time of clarity in your life. She has no time for murkiness or distractions, Justice cuts through confusion like a sword. Rejoice, difficult decisions will feel easier now that you are able to be clear-eyed about the consequences and implications of your choices.
True fairness can seem rare in this world, but the card of Justice signifies that it is on its way to you soon.

Justice reversed represents a failure of the card’s titular quality. Justice and judgements that are not tempered with mercy often look like cruelty. The letter of the law is often not enough to provide true justice. Justice reversed may serve as a warning that you are judging others too harshly. You may think you sit on a loftier throne than they do, but who is to say you would not do the same if your circumstances were different? Your harsh judgements are betraying your biases.
Alternatively, justice reversed may represent someone who is deflecting their responsibilities. Being responsible for administering justice is a difficult task indeed and involves many tough decisions, so it is understandable that someone may be reluctant to take it on. However, decisions must be made for the world to keep on turning and Justice reversed is admonishing you or someone else in your life to step up to the plate.
Finally, Justice reversed may be warning you about the dishonesty of someone around you, or your own penchant for stretching the truth when it serves you. The truth always catches up with a liar eventually.