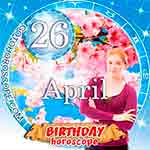 People born specifically on the 26th of April are imagined to be visionary yet practical and full of the determination and persistence typical for a Taurus. This particular day's astrological planet is Saturn, it makes your temperament very inquisitive with fine judgment skills and sharp decisiveness. If you have this birthday your amicability has a serious side to your nature that is gracious, shrewd and sensible. You are usually inventively creative and adept at management and problem solving giving you an excellent business mind. You are also likely to have fairly fixed ideas and views along with a strong need to collect, preserve and protect things. Individuals with an April the twenty sixth birthday tend to keep their beliefs and opinions to themselves but can be quite stubborn if they believe they are right about something. Like all bulls you need to be loved and understood to feel complete and will be loving and supportive in return.

Job selections to a person born on the twenty sixth of April are often made easily as you are so decisive. Career areas that inspired you in childhood are the usual choices and you may be especially drawn to self employment in later years. Your combination of creativity, curiosity and logic grants you the capability to turn your hand to any type of work. You are, as a rule, careful with your hard earned finances and ordinarily spend and budget wisely. Saving money appears to be easy to do as you usually regard financial reserves, rather than material possessions, as a symbol of accomplishment.

For a Taurus, the person born on the twenty sixth day of April is typically amorous and sincere but untypically not so enthusiastic about romance. You tend to have many devoted friends and particularly in youth seem to be reluctant and unhurried to get romantically involved. Your emotions are a bit cooler than most others of your zodiac sign and you dislike being overly dependent on a partner physically or emotionally. Despite all these preferences your high sex drive and craving for affection and understanding eventually dampen your reluctance and encourage you to seek your destined soul mate. Finding the right partner is often an important part of your plans for the future so you may be selective but will take long term love commitments seriously. You are passionate, considerate and sensual in the bedroom and generally most turned on by touch.

Overall healthiness experienced by those born on April 26th can be quickly disturbed by too much stress. You have a tendency to sometimes overwork and as a result suffer from a build up of nervous tension and an inability to relax. Pacing yourself effectively and eating healthily is often essential to your general well being. As you are not often keen on sports or gym based exercise you could find that walking suits you better for relaxation purposes. The fresh air should help release any feelings of anxiety to aid a good night's sleep and give you some time and space to clear your head.

Main strengths of your character are presented in your dependability, tenacious will and your strongest forte of astuteness. These most favorable traits are a fabulous match for your other strong points of friendliness and a kind, giving disposition. Personality weaknesses for those born on April 26th are not really too troublesome as they simply involve sulky behaviors when things are not going your way. On these occasions you are prone to mope and isolate yourself or dig your heels in and display extremely obstinate behavior. This negative conduct is normally infrequent but can be difficult to suppress.

Being born on the 26th of April makes you likely to believe in the power of the mind for increased motivation and purposeful achievement. You appreciate and value the abilities you possess and are prepared to put in maximum effort to accomplish worthwhile goals. Your commonsensical approach for the most part guides you to set yourself realistic aspirations. Aside from your professional aims you hope to realize your dream of the perfect love partnership. Despite your seemingly unenthusiastic manner regarding relationships this desired wish is often greater than the need to succeed in other areas of life.

As you were born on the twenty sixth day of the month the two and six in your birth date total a Root number of Eight. This numerical reference to your birthday has the keyword 'Leader' emphasizing your persistent determined shrewdness and discernment. The 8th Tarot card in the Major Arcana representing Courage is linked to your birthday. This symbolizes both your charisma and perseverance and also the moral code you adopt. The luckiest gem for April the twenty sixth birthdays is believed to be a Black Pearl. Wearing it should bring you prosperity and wisdom as well as warding off surrounding negativity.

The probabilities of male and female Taurus personalities are conceived to be astrologically influenced by the planet Venus. The actual day you were born on, the twenty sixth of April has the astrological ruler Saturn's influence. Consequently your unique set of probable traits is decided by the combined strength of these 2 planetary authorities. Your innovative enterprising spirit can take you far in life while your practicality and seriousness help you along the way and in addition express your maturity. If you can overcome or better control your proneness to sulking it could speed up your rate of progress and lead to less stressfulness. In conclusion people born on April the 26th may need to try listening more and avoid being every now and then insensitive to the concerns of others.