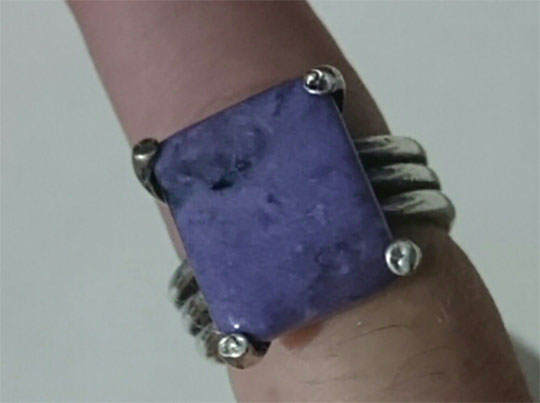 Charoite is named for the Chara River in the Sakha Republic, Siberia, Russia where it was first mined. This unique mineral was discovered in the 1940s during Stalin's regime, when a railway tunnel was being built. However, this unusual rock only became known outside the region when it was officially reported in 1978.

Charoite has been called by crystal healers the "Stone of Transformation" and the "Stone of the Spirit". The stone's vibrations release a person from the boundaries of the material world and elevate them to a higher state of spirituality. Furthermore, Charoite transmutes all forms of negativity into positive energies. Moreover, wearing or carrying a piece of Charoite will inspire one to do acts of altruistic self-sacrifice for the highest good of all.

Charoite is a high-vibrational stone used by shamans, psychics and healers. The stone's energies enhance one's psychic powers. It is especially helpful in developing one's potential for clairvoyance, clairaudience and clairsentience. Furthermore, Charoite increases the clarity and accuracy of the information channeled from the spiritual realms.

Meditating with a piece of Charoite helps one to establish a communication line with the spirits of one's ancestors who have passed over. The protective energies of Charoite help to prevent the draining of the physical energies during channeling.

Charoite promotes personal transformation. This stone is especially beneficial for a person who is going through a period of radical changes in life. Its energies not only help one to overcome the confusion caused by the sudden disruption of one's daily routine, but also encourage one to learn from the experience. Remember: Life's trials and tribulations are Divine lessons that were sent with the purpose of making us stronger and wiser.

Charoite is the lucky stone for spiritual teachers and light workers. The stone emanates powerful purple ray energies that not only cleanse the aura from all types of negative energies, but also create a shield of protection around the aura. Charoite's protective shield will block and transmute any kind of psychic attacks, ill wishing, Evil Eye and black magic.