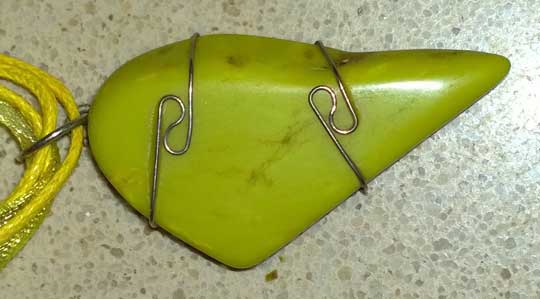 Gem grade specimens of Gaspeite are mined nowadays in the USA, Italy, Greece, Spain, South Africa and also in several localities of Australia, including Western Australia, in the areas of Kambalda and Widgiemooltha, south of Kalgoorlie and north of Perth. The aboriginals of Australia used Gaspeite in their ceremonies for inducing psychic visions. The medicine men in Canada and the shamans of indigenous Australia wore Gaspeite necklaces, bracelets, and beads as a talisman for achieving success.

Gaspeite is a typical New Age Stone, which was officially discovered in 1977 by the American mineralogists, D.W. Kohls and J.L. Rodda on the Gaspe Peninsula of Quebec, Canada; hence the name of this stone. 1977 is also the year in which the American astronomer Charles Thomas Kowal discovered the minor planet (asteroid) Chiron. Indeed Gaspeite vibrates the energies of Chiron and the Divine Synchronicities associated with this stone are in line with Chiron's transits. Some astrologers claim that Chiron rules Sagittarius and Gaspeite is the birthstone for 3°- 4° Sagittarius. This no coincidence, but the exact timing of Divine Synchronicities that teach us about the energies of Chiron and Gaspeite, which were discovered in the same year.

Chiron, known as the wounded healer, helps to bring all those traumas that are buried deep down in our subconscious minds to the surface so that we can face them and release them. Healing is only possible after we have cleansed our spirits of all that morass inside us. Gaspeite, the birthstone of Chiron, has the same effect on us. Gaspeite's influence is twofold: firstly it brings us into situations which "remind" us of those incidences that caused our traumas in past lives and/or early childhood, and secondly it helps us to understand how we can heal.

Gaspeite is a leading crystal for bringing Divine synchronicities into your life. The vibrations of this stone not only attract Divine synchronicities but also help to raise your awareness for effectively using these events for the highest good of all. You can wear a piece of jewelry set with Gaspeite or carry a raw or tumbled piece in your purse or pocket. You will see the crystal's effect almost instantly.

Green is both the color of nature as well as the color for healing. And like all green stones, Gaspeite has powerful healing energies. Many health issues, especially obesity and chronic lack of energy, are caused by a sluggish metabolism. Carrying a piece of Gaspeite on you, either set in a piece of jewelry or as a loose stone, will help to speed up your metabolism. You can also prepare a Gaspeite gemstone elixir to add to your morning coffee or milk. This will also boost your metabolism.