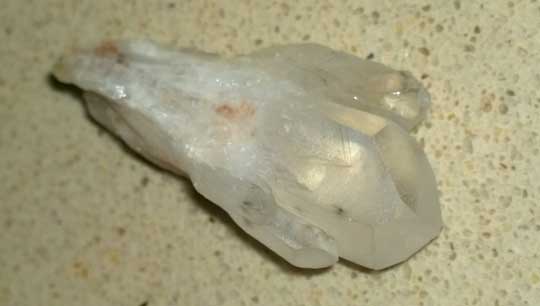 Hollandite Quartz, also known as Black Star Quartz, is a variety of Clear Quartz with tiny inclusions of Hollandite (Barium Manganese Oxide). These Hollandite inclusions look like six-pointed black stars. Hollandite Quartz was discovered in India during the first decade of the twentieth century. This variety of Quartz is named after T.H. Holland (1868-1947), director of the Geological Survey of India.

Hollandite Quartz is a very powerful healing crystal, which vibrates the energies of the six-pointed star, also known as the "Star of David". The Star of David is composed of two interconnected triangles, one facing upwards and the other facing downwards. The energies of the six-pointed star serve to bridge the spiritual realms with the physical dimension, or in other words, connect heaven and earth. The Star of David, in Hebrew "David's Shield", is a popular symbol used in amulets, crystal grids and meditations to create a protective shield against the "Evil Eye", as well as for attracting good fortune and material success.

Wearing a Hollandite Quartz point on a cord around your neck or carrying one in your pocket can make you feel and look better. The crystal's refreshing energy has the power to rejuvenate anyone who feels exhausted and worn out. Furthermore, the frequency of this crystal automatically speeds up your metabolism to help you lose weight and feel more energetic. If you are trying to lose weight, prepare a Hollandite Quartz gemstone elixir and add six drops of it to your first cup of coffee or milk in the morning for a month (thirty days). You will be surprised at the results.