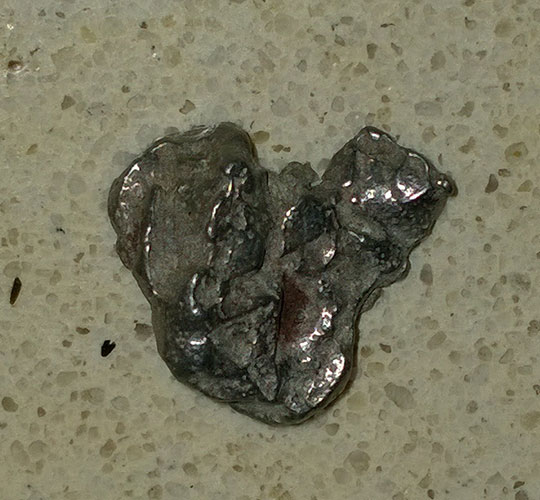 Iron-Nickel Meteorite is a powerful psychic tool, which emanates Pluto's intense electrical vibrations. This type of Meteorite can be used for awakening one's latent psychic potential, which is usually dormant in our regular routine of everyday life. Whenever you want to tune into your psychic mode of awareness, use the Iron-Nickel Meteorite as follows:

1. First of all make yourself comfortable on a couch or in an armchair, lean back with your head against the backrest.

2. Secondly, hold with your left hand a piece of Iron-Nickel Meteorite against your "third eye", which is the point on your forehead just above the bridge of your nose and between both eyes.

3. Close your eyes and focus your intentions on letting the meteorite's electrical energies flow freely and forcefully up your spine and kindle all seven power centers ("chakras") on its way.

4. Allow the images and words to flow freely as your inner voice and vision begin to transmit the Divine information retrieved from the Akashic Records.

5. If you become drowsy and fall asleep during such a meditation then try to store everything you "hear" and "see" in your conscious mind's memory bank. When you wake up record in your meditation diary every detail of what you remember from what was revealed to you in your dream state.

The Iron-Nickel Meteorite's powerful transformational energies can be spiritually metamorphosing for those who are ready to work with this power tool. Before working with this Meteorite, you need to be spiritually ready to deal with its intense Plutonic energies, because the impact is groundbreaking and immediate – like an atomic explosion. For this reason, people who in their spiritual development aren't ready yet to deal with the Meteorite's vibrations, will instinctively shy away from it.

One famous source for Iron-Nickel Meteorites is in an area situated on the border between the provinces of Chaco and Santiago del Estero, northwest of Buenos Aires, Argentina. The Spanish settlers named this area "Campo Del Cielo" ("Field of Heaven"). The Campo Del Cielo Meteorites comprise about 92.9% of iron, 6.7% of Nickel, and 0.4% of cobalt.

Specifically the Campo Del Cielo Meteorites vibrates the energies of the Phoenix; its vibrations can transform traumas and pain into renewed life force energies. Moreover, this specific kind of meteorite can also be used for dream healing by placing a piece under one's pillow before going to sleep. These meteorites are also used in meditation for connecting with one's ancestors and spirit guides.