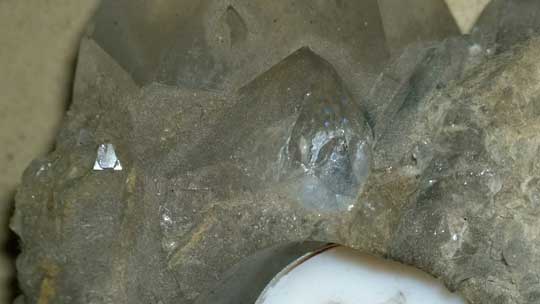 Record Keeper Quartz is a very high vibrational Quartz Crystal that has clearly etched triangles on its termination faces pointing upwards towards the apex of the termination. These etched triangles, or "Record Keepers", are one of the distinguishing features by which one can identify a quartz that dates back to Atlantis. Hence the name "Record Keeper" – these etched triangles contain the memories of Atlantis and it's highly evolved spiritual knowledge. All the cosmic information that was known to the wise men of Atlantis has been lost with the destruction of Atlantis; today we are only at the early stages of rediscovering these ancient esoteric teachings of the Atlanteans. If a Record Keeper Quartz comes your way, then that is a definite sign that you are an Atlantean who has reincarnated to complete the learning and teaching process, which you started during your past lives in Atlantis.

As opposed to the Raised Record Keeper who activates your cellular memory to retrieve the information stored within your own being, meditating with a Sunken Record Keeper will activate the information contained within the crystal itself independently of your own personal memory bank. If you chance on such a crystal, then the odds are that it must have been you who had programmed this particular Record Keeper in your past life. And now in this life your personal crystal has returned to you as an aid to help you continue on your spiritual journey here on planet earth. As the saying goes: "What you sow in one life you will reap in another life".