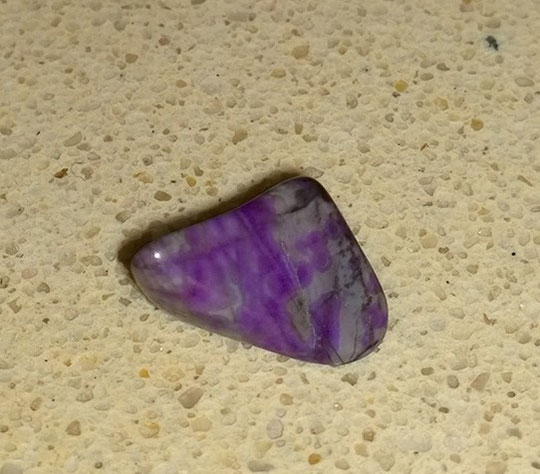 Sugilite, also known as Lavulite, Royal Azel, Cybeline, and Wesselite, is a New Age stone that was discovered in 1944 by the Japanese geologist, Kenchi Sugi. Before that, there are no records of this stone having been used or known. Crystal healers have ascertained that the energies of Sugilite help to integrate body, mind and spirit. Meditating with a piece of Sugilite can heal the broken spirit of a person who has suffered a disappointment; its energies help to arouse forgiveness and consolation. Sugilite's powerful vibrations shine like a purple flame in the dark. The stone not only comforts a person in times of hardship but it can turn hostilities into peace and enemies into friends. Sugilite also has the power to alleviate depression, worry and pessimism.

Sugilite emits a pure violet ray for cleansing and healing. Light workers and healers use this stone for eliminating all traces of negative attachments from the aura. This process brings you back to childhood innocence and chastity.

Sugilite is a highly protective stone. Carrying or wearing a piece of Sugilite encompasses you with a violet fire of purification, shielding you from psychic vampires who seek to parasite on your energies. The moment you start to wear a piece of Sugilite you automatically become a receptor to channel Divine Light into the earth plane. This boosts your aura and makes you shine like a spiritual beacon; people will instinctively feel that they can turn to you for guidance and advice.

Sugilite is the New Age Stone of Love. This stone was discovered towards the end of World War II, when many members of the Hippie movement were born. These Hippies, who preached "Make love not War" during the years when the U.S. army was at war in Vietnam, laid the foundations for a shift in social awareness globally. This shift in social awareness is seen as the beginning of the Age of Aquarius.