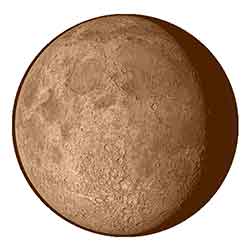 Moon in Your Horoscope

The Range and Focus of your Emotions

The Moon in Astrology is fairly well known to represent the opposite feminine side to the masculine influenced Sun. It is believed to be influential in focusing on and revealing the emotional aspects of our probable behavior. The strength of the Moon's astrological influence is believed to be almost as strong as the Sun's. It is thought to concentrate primarily on the likely awareness and sensitivity of a person's personality. The Moon cycles every month and so its effects although not as powerful as the Sun are more frequent. Its position in your birth chart can quite accurately help indicate your basic emotional psyche. In opposition to the Sun and its ego forming influences, the Moon offers balance to the picture with its emphasis on emotion traits.

The Moon is a natural satellite to the planet Earth and is much smaller, being only a quarter of its diameter in size. It has nearly the brightest significance in the sky, second only to the brightness of the Sun. The gravitational pull of the Moon influences the Earth's ocean tides and our 24 hour clock. It has phases during its monthly cycles that determine the amount of the Moon we can see at various times. In Astrology it is symbolized as a crescent shape and its location in a natal horoscope chart is important. It will reveal the accompanying emotional character to the Sun's egotistical personality interpretation.

There are a few myths concerning the Moon and various interesting references to it throughout history. They help reinforce the balancing symbolism of the Moon and its association with our life patterns. The most fascinating tale is probably of the Hindu belief in the Moon God Soma who is thought to ride through the sky in a chariot pulled by white horses. It is believed he drinks an elixir that makes him immortal and this drink is kept safe and in a secret place on the Moon. Legends like these emphasize the strength and mystery of the Moon's magical influence and its connection with life energy and emotional forces.

The different phases of the Moon are mythically explained by the antics of the Moon God Anningan. He is a legend of the Inuit people from Greenland and thought to be constantly chasing his sister Malina the Sun God. Each phase of the Moon is believed to see him get much thinner as he chases her forgetting to eat. For three days out of every month it is a new full Moon and this is when he stops to satisfy his hunger pangs. This is a delightful way of describing and helping people recognize the variations in the Moon's movement cycles. It also helps explain the effects of the Moon's visionary presence and its significance as an indicator of emotional states in Astrology.

A persons Moon Sign position is always worth taking note of as sometimes this positioning can disclose revealing traits. If the Sun Sign interpretation is not divulging enough information the Moon's location at the time of birth can fill in any missing pieces. The Moon's place in a horoscope plot focuses on the inner self, feelings and the emotive projection we tend to show to others. It can help us uncover and understand how and why we view things differently as individuals even though we may be the same Sun star sign. Looking at our Moon placement will offer explanations of our variety of emotional responses and our levels of observation. From the Moon's positional point we are able to roughly estimate and measure a person's possible perception or responsiveness. We can also assess their likely ability to express themselves too.

For Astrology reading the Moon is symbolized by a curved semi circular shape and it is believed to symbolize the mind and progressive human spirit. Many people believe that a woman's menstrual cycle is connected in some way to the Moon. This is a good way of remembering its predominantly emotional significance in the use of horoscope interpretations. If we are inspecting the likelihood of inner thinking variations and personality of a person we must consult the Moon's indications. The easily identified symbolic reference makes it quick to locate its presence and point in time in any horoscope.

The Moon in astrological terms is said to be ruled and driven by the sign of Cancer. This is probably why Cancerians are the most sensitive sign in the zodiac. Within a birth chart a look at the Moon's plotted and timed whereabouts can act as a guide to typical emotional and imaginative probabilities. If this detail is used in conjunction with the Sun sign revelations it can assist in the accurate analysis of someone's all round characteristics. It will often deliver a more realistic and informative view of a personality structure rather than just a glimpse at the basics. Planet Profile
Earth's Moon: Facts & Figures

Discovered By : Known by the Ancients
Date of Discovery: Unknown

Additional Information:
Because of the gravitational pull of the Sun, the extreme ranges of the Moon from the Earth are from 356,400 km to 406,700 km.


The regular daily and monthly rhythms of Earth's only natural satellite, the Moon, have guided timekeepers for thousands of years. Its influence on Earth's cycles, notably tides, has also been charted by many cultures in many ages. More than 70 spacecraft have been sent to the Moon; 12 astronauts have walked upon its surface and brought back 382 kg (842 pounds) of lunar rock and soil to Earth.

The presence of the Moon stabilizes Earth's wobble. This has led to a much more stable climate over billions of years, which may have affected the course of the development and growth of life on Earth.

How did the Moon come to be? The leading theory is that a Mars-sized body once hit Earth and the resulting debris (from both Earth and the impacting body) accumulated to form the Moon. Scientists believe that the Moon was formed approximately 4.5 billion years ago (the age of the oldest collected lunar rocks). When the Moon formed, its outer layers melted under very high temperatures, forming the lunar crust, probably from a global "magma ocean."

From Earth, we see the same face of the Moon all the time because the Moon rotates just once on its own axis in very nearly the same time that it travels once around Earth. This is known as "synchronous rotation." Patterns of dark and light features on the nearside have given rise to the fanciful "Man in the Moon" description. The light areas are lunar highlands. The dark features, called maria, are impact basins that were filled with dark lava between 4 and 2.5 billion years ago.

After this time of volcanism, the Moon cooled down, and has since been nearly unchanged, except for a steady rain of "hits" by meteorites and comets. The Moon's surface is charcoal gray and sandy, with much fine soil. This powdery blanket is called the lunar regolith, a term for mechanically produced debris layers on planetary surfaces. The regolith is thin, ranging from about 2 meters on the youngest maria to perhaps 20 meters on the oldest surfaces in the highlands.

Unlike Earth, the Moon does not have moving crustal plates or active volcanoes. However, seismometers planted by the Apollo astronauts in the 1970s have recorded small quakes at depths of several hundred kilometers. The quakes are probably triggered by tides resulting from Earth's gravitational pull. Small eruptions of gas from some craters, such as Aristarchus, have also been reported. Local magnetic areas have been detected around craters, but the Moon does not have a magnetic field resembling Earth's.

A surprising discovery from the tracking of the Lunar Orbiter spacecraft in the 1960s revealed strong areas of high gravitational acceleration located over the circular maria. These mass concentrations (mas-cons) may be caused by layers of denser, basaltic lavas that fill the mare basins.

In 1998, the Lunar Prospector spacecraft team reported finding water ice at both poles. Comet impacts deposited water on the Moon. Some of it migrated to very dark, very cold areas at the poles.

Much remains to be learned about our Moon. Researchers continue to study the samples and data returned by Apollo and other missions, as well as lunar meteorites.


In mythology :
Diana a goddess of the moon and wild places. Diana is the primal powerful goddess and the 'Queen of Heaven' in the Roman Pantheon. In ancient times Diana was thought to lead the wild hunt through the night skies. Her hunting party was said to comprise of people who had died before their time, either in the flower of youth or by violent means. She shares the role of leader of the wild hunt with other goddesses such as Hecate, and Artemis. In British mythology this task is usually reserved for a male figures such as Gwyn ap Nudd, and other more local folk heroes and anti-heroes.

There is some evidence that Diana was worshiped as a triple goddess, the wild huntress being one of the divisions. The others were the mother of creatures, and the lunar virgin.

As a powerful prime goddess of the moon, open skies and womanhood, many witches have adopted her as a deity in modern times.

In classical times she was also seen as the 'witches goddess' having a dark side as well as the more positive aspects of the lunar force. There is no doubt that her worship was looked on disfavourably by the early Christian church. Later it is probable that she was associated with St Anne, who shares some of her characteristics. She appears in the confessions of witches, cruelly extracted by the torture from the 15th century, when her worship was revived in parts of Europe.

In Roman times her chief festival 'The Festival of the Torches' was held on the 15th of August, when lighted torches were placed in her sacred groves. Her other sacred day was the 'Feast of our Lady Queen of Heaven' on the 31st of May.

In Rome she was invoked as protection for the years harvest, and against destructive weather although many Roman gods are interchangeable in these aspects. Her sacred animals were the stag and the dog.