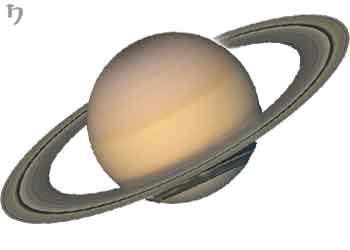 Saturn in Your Horoscope

The meaning and importance of the location of Saturn in a person's birth chart cannot be over emphasized. It is thought that this planet's influence is sometimes more important than the influences of the Sun and Moon. This is because Saturn's presence is concerned with self preservation and this is essential to living beings. It is considered of even greater significancy to a personality than both the Sun's ego forming forces and the Moon's emotional influences. Saturn positioning on a horoscope can often expose more fully the inner workings of someone's character. It can help explain and elaborate on all of the other revelations contained within natal date and time based analysis.

Saturn is the second largest planet in our Solar System and is sixth farthest from the Sun and just visible. It is another of the gas giants and its radius is about nine times bigger than that of the Earth's. Saturn's core is surrounded by metallic Hydrogen, this is followed by a liquid Hydogen and Helium layer. The outer surface of the planet is gaseous and it has a magnetic field a little weaker than our Earth. In Astrology readings Saturn is associated with constraint and its restrictions are the things we need in order to develop our full potential. Without restraints leading to self control to drive a personality and its other traits, a person's self will cannot prosper. We all need bounderies and obstacles to encourage us to not stagnate. If they are not present we are unable to forfill our potentiality.

Greeks, Roman's and Hindu's provide most of the mythology involving the planet Saturn that is relevant to astrological theories. The ancient Greek people called this celestial body Kronos or Chronos rather than Saturn and dedicated it to the Father of Time. It is believed that this God killed his father Uranus and separated him from his Earth wife Gaia. This is the moment in time when it is presumed in myths to have set the heavenly bodies moving. It was then assumed by the Greeks that this new beginning would have initiated the ordered ruling of time. The first generation of Hindu people worshipped all planets including Saturn and imagined that their worship would protect them if they were in danger.

In Roman myths Saturn was named as such from the Latin word Saturnus which is thought likely to mean 'sow'. This has reference to the idea of Saturn being the God who was in charge of agriculture and harvests. It also connects with his image of having the authority on Time. Saturn was envisioned as an elderly man who wore a cloak wrapped in chains and he carried a scythe. The Roman's had a celebration every winter called Saturnalia in honor of this God and during this time no war was allowed to be declared. Throughout this period the role of employee and employer were reversed with bosses serving workers.

This fascination with time and growth from mythical tales about Saturn goes some way towards explaining its significance for astrological purposes. It's vital message of preserving for survival and growing strong is easily recalled from Saturn's connection with temporal development and progress. Saturn provides the life force that helps all the other planetary influences to work together. Without its support horoscope inspections would be missing a large and valuable part of information. Saturn's gift of the birth, evolution and expansion of a person's character is an substantial revealer of how an individual pursues and indulges to satisfy their basic needs.

For astrological charts the planet Saturn has a designated icon consisting of a crescent and a cross. The simplest way to remember it is to think of Saturn's scythe or sickle as the symbolic shape looks just like it. The crescent in the symbol is meant to represent the mind or human spirit. The cross signifies matter taking precedence over the spirited intelligence. This symbol's assumed representation reminds us of the signification of Saturn within a natal review. It is quite easily distinguished from the other symbolized zodiac depictions used and it is quickly recognizable. It can help indicate things like a person's level of ambition or sense of duty to others.

In its 29 year cycle Saturn is believed to be ruled and influenced by the Western Astrology sign of Capricorn. This Sun sign is also associated with ambitious, industrious and progressive natures. This input compliments Saturn perfectly in its influential purpose of personal progress and improvement. Saturn is all about security, contentment and achievement and will disclose these deep rooted traits in a personality formation. The planets in a horoscope express happenings and the zodiac signs show how it will happen. So because Saturn has a Capricorn ruler it's this planet's power is probably the most significantly strongest in the effect on personalities. Planet Profile
Mass (kg) 5.69 x 1026
Diameter (km) 120660
Mean density (kg/m3) 690
Escape velocity (m/s) 35600
Average distance from Sun 9.537 AU (1,426,725,400 km)
Rotation period (length of day in Earth days) 0.44 (10.2 Earth hours)
Revolution period (length of year in Earth years) 29.46
Obliquity (tilt of axis degrees) 26.7
Orbit inclination (degrees) 2.49
Orbit eccentricity (deviation from circular) 0.056
Mean temperature (K) 88 K (1 bar level)
Visual geometric albedo (reflectivity) 0.46

Rings
Rings are 270,000 km in diameter, but only a few hundred meters thick. Particles are centimeters to decameters in size and are ice (some may be covered with ice); there are traces of silicate and carbon minerals. There are four main ring groups and three more faint, narrow ring groups separated by gaps called divisions.

Clouds and Spokes
Several dark spoke-like features can be seen across the broad B ring (left of planet). The moons Rhea and Dione appear as dots below and below left of Saturn, respectively. Voyager 2 made its closest approach to Saturn on August 25, 1981.
Global Dichotomy
The leading hemisphere of Iapetus is covered by extremely dark material, whereas the trailing hemisphere is covered with bright material. This dichotomy puzzled the discoverer, astronomer Giovanni Cassini, who noted that the satellite was visible only from one side of its orbit. Two models have been proposed to explain this. The first proposes that dark material from Phoebe, a dark exterior moon, falls onto Iapetus from orbit. The second model says that the dark material erupted from the interior of Iapetus into a low area in the leading hemisphere.
Irregular Body
Scientists believe that this small irregular satellite may once have been a piece of a larger satellite. Hyperion measures approximately 370 x 280 x 225 km (229 x 174 x 140 mi) and orbits outside of Titan.
Obscure Titan
Titan's hydrocarbon-rich nitrogen atmosphere scatters sunlight in a forward direction over the limb around the entire disk. The surface of Titan is obscured due to a deep cloud layer. The diameter of Titan is 5150 km (3200 mi).
Water Ice
The density of Saturn's moon Rhea suggests that it is largely made of water ice with a small proportion of rocky material. Note that the ancient impact scars that ripped through the ice early after the formation of the solar system are still preserved to this day. 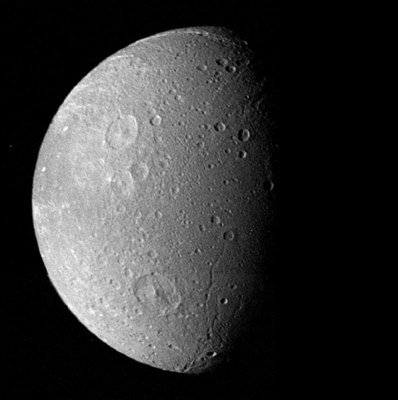 Full Disk
Impact craters are may be visible records of the collision of cosmic debris. On Dione, the largest crater is less than 100 km (62 mi) in diameter and shows a well-developed central peak. The sinuous valleys may have formed when faults broke the moon's icy crust.
Smooth Crust
In this image of Saturn's fourth large moon, Dione, the trailing hemisphere is visible. This region was protected from billions of years of impact-gardening, which obliterated old surface features in the leading hemisphere. Icy fluids escaped to the surface through breaks in the crust and formed giant crisscrossing, wispy, bright marks on the exterior.
Impact Craters
Tethys is approximately 1100 km (684 mi) in diameter and is densely populated with impact craters. One of them is surrounded by a hummocky ejecta blanket. Ithaca Chasma stretches from left center up toward the crater, covering three quarters of the circumference of Tethys.
Bright Satellite
The surface of Enceladus resembles that of Jupiter's satellite Ganymede. Some areas are smooth and uncratered while others contain impact craters up to 35 km (22 mi) in diameter. Linear sets of grooves tens of kilometers long traverse the surface and are probably faults resulting from deformation of the crust. The uncratered regions are geologically young and may indicate that Enceladus has experienced a period of relatively recent internal melting. The satellite is about 500 km (310 mi) in diameter and has the brightest surface of any of Saturn's satellites.
Cataclysmic Impact
Mimas, the innermost of Saturn's larger moons, was nearly shattered by a cataclysmic impact. From observing Mimas' crater Herschel, scientists speculate that the inner satellites of the outer planets have, in fact, been shattered and gravitationally reassembled many times in their geologic history. Herschel's walls are approximately 5 km (3.2 mi) high, parts of its floor measure 10 km (6.2 mi) deep, and its central peak rises 6 km (3.7 mi) above the crater floor. The diameter of this moon is 394 km (244 mi).
Saturn's Moons
Saturn and two of its moons, Tethys and Dione, were photographed by Voyager 1 at a distance of 13 million km (8 million mi). The shadows of Saturn's three bright rings are cast onto the cloud tops. The limb of the planet can be seen easily through the 3500 km (2170 mi) wide Cassini Division, which separates the A and B rings. The view through the much narrower Encke Gap, near the outer edge of the A ring is less clear. Closer to the planet is the faintest of Saturn's three main rings, the C ring or crepe ring, barely visible against the planet.

In Roman mythology :
Saturn was a god of fertility and agriculture . He was commonly identified with the Greek god Cronus (Kronos), and there is an interesting story that explains how Cronus was transformed into Saturn.
The tale told by the ancient Romans is that Cronus departed from Greek soil when he and his Titan allies were conquered by the Olympians. In Italy, the name of this god was changed from Cronus to Saturn. As Saturn, the god fled to Latium in an attempt to escape from the wrath of his son Jupiter.

Saturn demonstrated his leadership abilities and became a ruler in Latium. As a king of Latium, Saturn was responsible for the remarkable achievements of this legendary time, a time which was thought of as the Golden Age of ancient Italy. According to the myth, Saturn introduced agriculture to his people by teaching them how to farm the land. For this reason Saturn was thought of as a god of fertility and agriculture.

There was even a Roman festival named after Saturn - the Saturnalia. This festival was celebrated during the winter, and it was a time of gift giving, feasting, and merriment. Indeed, the Saturnalia is an appropriate festival to Saturn, for it appears to evoke the prosperity and peace of Rome's mythical Golden Age.

In early myth, Saturn was associated with the obscure Italian goddess Lua. However later legends claim that he was married to Ops, a Roman goddess of the harvest who was identified with the Greek goddess Rheia.