2017 Chinese New Year вЂ“ Symbolism of the image, element and color of the 2017 year of the Fire Rooster.

We must immediately note however that this yearly cycle does not fully conform to the European zodiac, founded on the Gregorian calendar. The year of the Fiery Rooster begins on January 28th, 2017 and ends on February 15th 2018. It's important to note that all of January 2017 is actually under the horoscope for the previous year and that the Rooster will rule over one and a half months of the year of 2018 as well. In reality the Red Rooster is quite a unique image that really facilitates the interpretation of horoscopes for the given year's cycle. On the one hand, as Einstein so rightfully noted that everything in the world is relative, in the given situation it's also important to note several nuances, connected to the symbolism of imagery inherent to 2017. 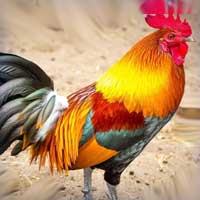 The Rooster represents the 10th of 12 signs in the astrological system of ancient China. Of course there are also systems based on 10, 60 and other numbers of cycles, but they hold no meaning to this current interpretation and analysis. A Rooster has an active temperament and deals with the manifestation of intentions - in other words we're talking about action. However many get lost in thinking that action means exclusively that of the physical variety in the material world, which is untrue. Words, as a flow of energy, thoughts as the potential for reality - all of these must be counted as well. This is why military generals and great thinkers like Socrates have been born into the year of the Rooster. The sciences receive just as much development in the year of the Rooster as military matters. The dynamic principles of Chinese philosophy rests on this - by this token we must not just understand the given system - even idleness may be considered active! All the same it's important to understand that at this stage more weight is given to the materialization of a solution, than to analytics or to making a decision by itself.

Also it's important to remember that though in 2017 the Rooster will acquire qualities like 'RedвЂќ or 'FieryвЂќ (which are similar in this context), by itself this sign is more connected to the element of Metal. And what does metal mean in the astrological and philosophical systems of China? That would be the human factor - meaning mankind and everything generated by him. Here we must understand the principle different in mentalities between the east and the west - in the traditionally European conception, there are four basic elements and man is looked upon as some other being coming from outside the universe, which is clearly separated from all other elements. In the east everything is different, there man is just another element, a natural part of the surrounding world, without which the entire world wouldn't be possible. This is just another principle (the second after dynamism) that lies at the foundation of the year of the Rooster - this natural harmony of action that provides success to any and all worldly pursuits. Without this, the beginnings of 2017 would be doomed to fail, or just be consigned to forever standing in one place.

Now we will investigate the attributes of the symbol of the Rooster in more detail with respect to 2017. Like we've already said above, it's possible to write Fiery Rooster and also Red Rooster. There's really no difference between them, although in the Western tradition it's common to use both together, that is Red Fiery Rooster. Here Fire means not only action or activity - it means energy, the culmination of something, the peak of influence and effect. This noted realization reaches from the soul. In reality, Fire represents an elementary duality: an intended goal and progress toward that goal. A simple mathematic line segment with two points on it. But of course the most direct path is not always the most safe or effect, so we won't strictly adhere to our mathematical model. Also Fire acts in the role of readiness for battle - whether he represents the actual battle with a real opponent or a struggle with worldly obstacles doesn't really matter.

In the pentagram of the Wu Xing (the ancient Chinese system uniting the Five Elements) Fire in the basic cycle transforms into Earth. What does this phenomenon mean? It's helpful to look at the close analogy of a forest fire, which burns old trees turning them into valuable fertilizer, and allows for the birth of a new generation of forest. On the other hand, a forest fire also destroys young trees and harms animals with its fiery embrace. But this is the way of things - unavoidable sacrifices are a part of modern human society. And the achievement of a goal demands some kind of expense - time, nerves, energy, emotion, money - all of these we lose for the sake of cherished goals. In the destructive cycle of Fire transforming into Earth, the analogy of the forest fire gives an added context of chaos and death. Strength without wisdom leads only to destruction - in other words, intentions unfulfilled, goals unachieved. It's important to do everything reasonably and deliberately in accordance with the laws of conscience and honor. Otherwise an action can not be positive, life-sustaining or leading to the creation of something new.

Another important factor is that the successful combination of events in the Chinese zodiac are formed by elements themselves. Each sign corresponds with positive, negative or neutral elements. In other words, not all Roosters in 2017 will find good fortune. Particular good luck will be awarded to those Roosters, whose birthdays correspond to Fire (red color). On the one hand, this doesn't mean that an opposing sign (let's say the Forest Tiger) will become an obvious loser. Each person has a chance at success, although of course these chances are not equal. The eastern zodiac system and the horoscopes based on it are directed so that each may have a chance at success and may also avoid adverse circumstances. Such a warning can become a useful weapon. The year of the Fiery Red Rooster possesses characteristics like decisiveness, assertiveness, goal-oriented direction, willpower, precision, responsibility and practicality. These are not only traits that are useful to possess in order to achieve our goals, but they are also the qualities that 2017 will give to us, which will develop in us and will enable us to take pride in ourselves.

How to gratify the Fire Rooster to receive prosperity in upcoming 2017 year?
[Reply] [Reply with quote] [Cancel reply]