Kardashians horoscope Chart, Gemini and Libra are great couples but what if they both celebrity

Gemini and Libra make great couples, the two air signs intuitively understand each other like two violins playing a Bach concerto. Kim KardashianвЂ™s ascendant is in Sagittarius, which makes her naturally attracted to Geminis. The ascendant refers to where the sun was rising at the moment she was born and describes how our personalities express themselves outwardly and also how our bodies are shaped. Each sign rules a part of the body and where our ascendant falls is the part of the body that will be emphasized. No surprise here- Sagittarius rules the buttocks- think centaurs. 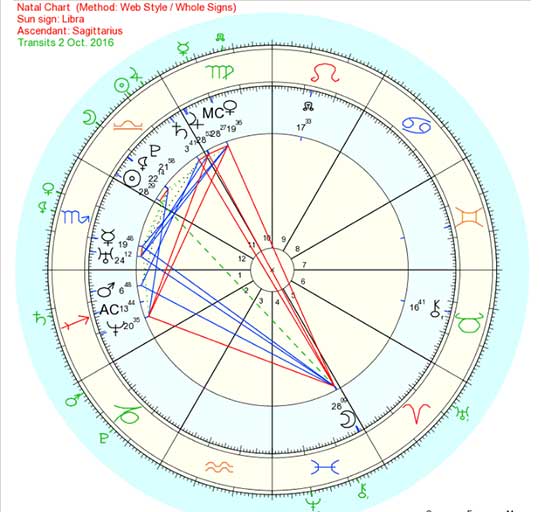 Of the two, Kim Kardashian has by far the more harmonious chart. Her Sagittarian first house is home to her Mars and Neptune, giving her energy and glamor. This first house is ruled by Jupiter which is almost exactly conjunct her mid heaven in the 10th house. This configuration clearly shows how her personality and body are in perfect harmony with her public persona and career. Kim Kardashian never graduated from college but with her North Node in the 9th house of philosophy, religion and law, and her ascendant in Sagittarius, she would have also been very successful following in her fathers footsteps as a lawyer. She is a woman who intuitively understands philosophical issues and has the mental energy to pursue them.

According to annual projections, her 12th house was activated on October 2nd at the time of the robbery, while the ruler of her Scorpio 12th house, Mars, was in her 2nd house of possessions and property. This points to a secret enemy of Kim Kardashian being behind the robbery and that this was probably an inside job.

Also on that day, Saturn, the major malefic, was sitting right on her ascendant in the 1st house, meaning that this robbery is going to have a major effect on how she sees herself, especially how she sees herself among those close to her. This episode could have an important impact on her entire self image and how she projects herself in general. Saturn will be in Sagittarius until December of 2017, but for Kardashian, the worst is over as Saturn has moved passed her ascendant. 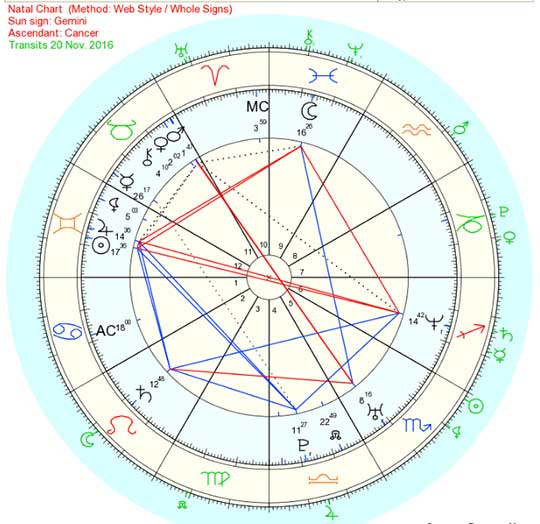 Kanye West has a complicated chart and is the more complex and troubled of the two. While Kim Kardashian has her sun in the 11th house, the house of good fortune and friends, KanyeвЂ™s Sun is in the difficult 12th house, the house of secret enemies and confined places and in modern astrology, the house of transcendence. Conjunct (next to) his Sun in the 12th house is Jupiter, the major benefic, making this house very important for him. Kanye West is a person with an incredibly rich inner life, a born dreamer with an expansive spiritual drive that probably doesnвЂ™t get expressed so much in his music, but is nonetheless there.

Kanye West also has Neptune in the 6th house, the house of health and work. He probably has had his issues with substance abuse and is someone who has had a difficult time maintaining the grind of work. Neptune is about fantasy, dreaming, and illusion and Neptune in the 6th house can be a real challenge when it comes to maintaining a day job. On November 20th, when he had the breakdown, Pluto was slowly moving into an opposition with his ascendant in Cancer. This is a powerful force slamming down on his ego and itвЂ™s not surprising that he would have intense emotions regarding his identity during this time. The crisis should reach its peak towards the end of January of 2017, and then hopefully things will begin to resolve for him by the middle February.

While Kim KardashianвЂ™s north node, her life path, is in the 9th house which represents travel, philosophy and law, KanyeвЂ™s north node is in the 4th house, along with his natal Pluto. From this placement we can glean two things, first, his relationship with his mother was difficult, and second, his life path should be focused on his family and roots and not so much on the world stage. Comparing the charts of Kim Kardashian and Kanye West, it does seem that her social life conflicts with his need for a stable family because her natal Pluto in the 11th house is sitting right on his north node.

Kanye West is a obviously a very talented and imaginative person, but from his chart, maybe he would have been happier as a writer with a stable and supportive family that gave him the time alone that he desperately needs. Having a 12th house Sun conjunct Jupiter means he needs lots of time alone to charge his batteries and explore his immense inner world.

Generally speaking, these two are compatible, though something in Kardashian is conflicting with KanyeвЂ™s need for a stable, peaceful home. While of course they are both wildly successful in terms of fame and fortune, astrology shows them happier living a different life.

Kanye, the private, creative genius spending hours alone pounding away at the typewriter married to Kardashian, the stable, successful lawyer who maintains for them a home and private sanctuary for Kanye. Maybe this crisis in both their lives will help them change course and start living more in harmony with their true selves.

Not Important 2016-11-28 22:09:24
👍 0 👎
yeah, gemini's destiny/fate is full of troubles. most of the times people can't/don't understand that gemini's mutability is not because of what he/she wishes rather because of the worst fate which forces him/her badly always to change the course of life. you can understand it clearly by this example, suppose you have such a bad luck that you're getting barrier or accident in 2-5km interval while your destination is 150km. if you fall in accident 10 times to pass 40km and then see the road is block and its impossible to reach your destination in time, wouldn't you change your path if you get chance ? and then wouldn't you change again if you get same issue in other road ? so, those people will never understand the gemini who never get experience of such a worst luck. I can say this from my life experience.