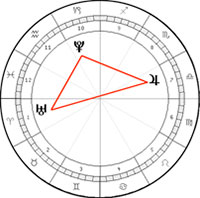 Have you felt as if the world has gone crazy lately? As in, more crazy than usual, or crazy in an especially crazy way? Well, it has, astrologically speaking. A cardinal T-square that began in November will remain until April 2017. Even though it will break up by spring, we will feel the effects of everything that started during the T-square for months and even years later. T-squares create tension and will bring things â€“ and people -- to the breaking point. They force people into action. A cardinal T-square forces people to start new things.

A T-square is an astrological formation wherein two planets oppose each other from opposite sides of the zodiac. A third planet sits about 90 degrees away from them at the apex. The tension of the opposition is funneled into the third planet. If you connected each of the planets with lines, the resulting shapes looks like an isosceles triangle. The planet at the apex looks for relief across the zodiac to the empty sign:

The T-square is difficult to handle as a transit, let alone in a natal chart. However, it pushes a person toward action. It can be found in the charts of many successful people, like Barack Obama and Coco Chanel, who overcome the odds to become wildly successful and even pioneers in their fields of work or study. They often feel that they have no choice but to succeed. They may not be born with privilege, or they may face terrible disappointments before finding success. However, they keep going. They have to keep going.

T-squares happen in signs of the same mode. The mode of a sign is the way it directs its energy. The modes are cardinal, fixed, and mutable. The cardinal signs of Aries, Cancer, Libra, and Capricorn direct their energy toward starting new things. The fixed signs of Taurus, Leo, Scorpio, and Aquarius direct their energy toward maintaining what has already been started. The mutable signs of Gemini, Virgo, Sagittarius, and Pisces direct their energy toward changing and adapting what already exists. All of the planets involved in a T-square usually want to use their energy in the same general way even though they have different ideas of how to express that energy. For example, in this current T-square, Jupiter in Libra opposes Uranus in Aries. Jupiter in Libra wants to open its arms and start new, big relationships, but Uranus in Aries wants to depart from all social obligations and reinvent itself as a brand new individual, beholden to no one.

The planets involved in the current T-square â€“ Jupiter, Uranus, and Pluto â€“ are in three of the four cardinal signs, Aries, Cancer, Libra, and Capricorn. The cardinal signs are the ones who make beginnings. Planets in these signs tend to make things happen from scratch. Aries starts life. Cancer starts families. Libra starts relationships. Capricorn starts institutions.

A strong desire to be everything to everyone (Jupiter in Libra) conflicts with the desire to rebel from society and be individuals apart from the group (Uranus in Aries). They're both aggravated by a desire to destroy everything and build a brand new world (Pluto in Capricorn). Where does this tension go? It goes to finding what the empty sign represents. Pluto takes all the tension and focuses it on finding a sense of security and of belonging in the empty sign of Cancer.

This T-square wants us to find the missing sense of belonging. There is a clear lack of balance, and the world is desperately trying to right things for everyone (Jupiter in Libra). The problem is that everyone has their own idea of what is good for everyone and mistakes it for what is actually only good for themselves (Uranus in Aries). We feel that we belong to the group when we are loved for who we are, as individuals. We feel that we belong when our individual talents, skills, and personalities positively contribute to the wellbeing of the group, and they in turn contribute to our individual sense of wellbeing. This is what we learn from this opposition. The problem is that Pluto is making this difficult.

Pluto in Capricorn, however, absorbs the energies of both planets and takes into account all of their cries and complaints. Pluto in Capricorn says that the existing order doesn't work, and that in order to fix things, we must destroy them and rebuild from the ashes. It's all or nothing, my way or the highway. This doesn't make coming together easy. It doesn't make it easy to become a world full of individuals, either.

On a global scale, this T-square has brought some unusual upsets. In America, the most obvious affect is the recent presidential election and continuing upset about that, as well as the rise in populism (Jupiter in Libra) and a desire to shake things up (Uranus in Aries) on both sides of the political spectrum. There is definitely a cultural and social divide, and a desire to get rid of everything that is corrupt and start anew (Pluto in Capricorn). The post-election season has been volatile, to say the least, and the new president's rise is a contested, bumpy ride. Ongoing terrorism against the Syrian people has forced refugees to flee for Europe and North America. This, of course, has awakened hostilities and suspicion (Pluto) in the native populations of those countries who feel their institutions (Capricorn) are threatened. On one hand, people want to welcome refugees (Jupiter in Libra), but they also fear that refugees will impose their religious beliefs and curtail freedoms (Uranus in Aries).

Other problems are starting to come to a head during the T-square. Brexit, which was decided in the summer of 2016, really came under way during this T-square. It became apparent that a lot of people who voted to leave the European Union didn't actually seem to know what they were voting for and what the impact would be. Now, they are seeing the impact of leaving the Union. The country is still divided on whether it was right to leave the European Union (Uranus in Aries) or to stay (Jupiter in Libra), and the divide (Pluto) is across class (Capricorn) and age (Capricorn) lines.

How this has affected you and will continue to affect you personally depends on a few factors. No one truly escapes a cardinal T-square, even if they're not aware of what it does to them. Some, however, feel it more acutely than others. Some of us just straight up get kicked in the ass, and some of us benefit. Sometimes, we end up with both the rewards and the punishments. Sometimes, we end up with backlash for our behaviors.

The people most affected have personal planets or points in the cardinal signs of Aries, Cancer, Libra, or Capricorn. This is especially difficult for those who have Jupiter in Libra in their natal charts. Jupiter moves around the zodiac about every 12 years, and those who have Jupiter in Libra may be experiencing a Jupiter return right now. This T-square feels like a double whammy, like karma returning. They either get unusual lucky breaks, or all their luck seems to disappear.
Those most effected may also have Pluto or Uranus currently making a major aspect (conjunction, square, trine, or opposition) to a personal planet in the natal chart. Jupiter, Uranus, and Pluto may also be making a major aspect to the Ascendant, Midheaven, Immum Colei, and Descendant in the natal chart as well.

Here are some examples of how the T-square have affected people:

â€¢ A young woman with transiting Uranus making a trine to her natal Sagittarius Midheaven suddenly realizes, in the midst of her university studies (Sagittarius), that what she is studying is not what would truly express her individuality (Aries) or personality (Jupiter), and suddenly changes her career path (Uranus) to something more artistic (Libra).

â€¢ A woman in her mid-thirties with transiting Jupiter conjuncting her natal Pluto suddenly has a strong urge to go into business (Pluto) to make more money (Jupiter) without telling anyone (Pluto) by making alliances with new people (Libra) and creating a new public persona (Libra).

â€¢ Another woman with the same aspect has suddenly developed the deep need for power (Pluto) over the people who influence (Libra) and is now a major political protester (Uranus) and advocate for individual liberty (Aries).

â€¢ A man in his sixties, who has never been particularly religious or spiritual, has transiting Jupiter making a conjunction to his natal Neptune in Libra. Uranus in Aries is now opposing his natal Neptune. Now, he feels a sense of individual (Uranus) spirituality (Neptune) and wonder at the vastness of the universe (Jupiter), but still refuses to adhere to any organized religion (Aries), though he regularly engages his partner (Libra) in spiritual discussions.

Of course, no one is a passive player here. If you know you have an itch, you'll scratch it. Like the people above, if you use these energies and do something productive, you'll feel relief. The lesson with this T-square is to initiate a change. This is an opportunity for people to grow. Take an active role in your own life and make changes that (positively) affect others. Yes, you can focus on your own little life and let things just pass you by, but is that really living? Pluto in Capricorn, Jupiter in Libra, and Uranus in Aries demand that you have courage, get off your duff, and do something.

To check and see how this T-square may have personally affected you and will continue to affect you, use our birth chart calculator to determine your birth chart.