Don't Panic. It's Only Mercury Retrograde! 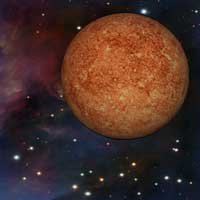 Yet, many fear it like the boogeyman or the apocalypse. It's now a flimsy but common excuse for making mistakes. However, it does actually exist, and does actually cause problems. It messes up communication. It makes writing difficult. It causes confusion. It makes things misunderstood. It creates messes.

But it has never caused a major problem, because it's actually not that bad. Let's start with what Mercury Retrograde is NOT:

Good. Now that we've cleared that up, this is what Mercury Retrograde actually is:

Mercury Retrograde is a time when the planet Mercury appears to be moving backward in the sky from our vantage point on Earth. It happens on average three times a year, and can last for a week to three weeks. During this time, Mercury seems to express its energies backward, inverted, or suddenly not at all. In which sign or signs it goes retrograde shows how it expresses those energies. For example, Mercury will be retrograde four times in 2017:

There is definitely a sense of Wait a sec. Didn't we just do this already? with Mercury Retrograde. This is especially true when Mercury goes back into the previous sign. It's not uncommon to experience déjà vu during Mercury Retrograde, or to have a psychic experience of clairvoyance or gain insight into a past life. But largely, we can look back with more clarity and fix things that we didn't get right when Mercury was direct.
See, this isn't all bad. After all, revisions make perfection. In fact, the retrograde is a great time to go back and revise the work you've already done.
It's a great time for thinking, planning, and fixing. It is not a good time for putting things out into the world.

So, What Actually Happens During a Mercury Retrograde Period?

Well This Sucks. So, Is Mercury Retrograde Good for Anything?

What If You Have Mercury Retrograde in Your Natal Chart?

Some people are born when Mercury is Retrograde. There are few things unique to these people. For example, they may not speak aloud too well. They can address crowds, and they can handle one-on-one conversations with people they feel comfortable with, but making small talk with new people or dealing with intimate conversation just leaves them lost. Many of these folks write more effectively than they speak. Some may be dyslexic. They may not take words or conversation at face value but rely more on tone, inflection, and what is implied in order to understand the meaning.

Those with Mercury Retrograde have an edge when it comes to getting at the heart of the matter. They not only get to the root of a problem, but they also know how to put mental images and feelings to words in a way that others cannot do. They can turn information over in their heads and analyze it without bouncing ideas off anyone else. They prefer solving problems on their own. The only problem is dealing with other people.
When it comes to any mental work, these guys would much rather work solo. Teamwork or working with a partner leaves them frustrated. Having to explain or justify themselves makes them retreat into the background. People may underestimate them because what these people say may go over a lot of heads. But these are not people to underestimate or take for granted: they see what others miss, and they're the people you need when everyone else has run out of ideas.
And during the Mercury Retrograde, these people shine. When everyone else is confused, they feel clear-minded. When everyone else doesn't have the right words, they know exactly what to say. When everyone else is glossing over details, they're sharp as arrows and eagle-eyed. During those few, scant weeks a year, those with Mercury Retrograde in their natal charts shine.
And then, it goes direct and they go back to their mysterious ways.

Do not fear Mercury Retrograde. Embrace it. Deal with it. And when it comes around, just be a little more careful with the details. And if someone blames a big mistake on Mercury Retrograde, don't say anything to them. Just walk away knowing that you know the truth.