German policy in 2017, Pluto & Saturn in action: from Hitler to Merkel

Absolute change where you know that you cannot go back. Like the job you get retrenched from. An unwanted pregnancy. Meeting that girl. These are events that wipe out the old and herald in the new. Its harsh. Its often unwanted. And yet for personal growth, its inevitable. It affects people as well as companies, families and countries. Its a form of sweeping away anything that is 'old' and making sure that no sign of it remains so that moving forward is all that is possible. Pluto is known for its transformative qualities and this can work in one of two ways : harsh repression, leading to a harsher backlash or acceptance of the spiritual path and voluntary change. Pluto is the slowest moving planet in the solar system and over time has the most profound impact on a chart. 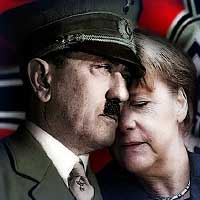 Saturn on the other hand, has a 29 year cycle and teaches us about our limitations. But within that, we learn valuable lessons which we call experience. This is the planet of wisdom, since after being tested many times, we come to understand ourselves and our world a bit better. Saturn orientated people are considered dour, cold or even unfriendly. But this is the negative of a great teacher. The better example is of hard times overcome.

An astrological connection between moving Pluto and any point in the original (or natal) chart, can lead to massive impact. This is called a transit and in general, the longer the transit holds, the more profound the consequence. With slow moving Pluto, a transit can take 2-3 years to pass. Saturn transits happen over days or weeks and has no real long-lasting effect, so we measure the passage of Saturn by transiting house.

Both elements are always present in a chart. Sometimes working together and sometimes opposing each other. To place this in context of history, we can look at two amazing examples : Germany of the second world war and modern Germany. The 'Master Race' and the unifiers of Europe.

The Third Reich : Nazi Germany from invincible to annihilated

The Third Reich era begun when Adolf Hitler was handled power on January 30, 1933. So began one of the histories most spectacular rises and falls. It was classic Pluto from beginning to end and its demise could have been foreseen as it begun, simply because of the classic Pluto mistakes that were made. Sadly, the world had to see out 12 years of terror and the loss of some 75 million lives well over over half of whom were non-combatants, before sense prevailed.

All the symbols of Pluto were present in Nazi Germany. The Schutzstaffel ('SS') initially Hiltler's 'Protection Squadron' became a defacto major paramilitary organization, whose role was brutal suppression of opposition. Their uniform was black with a skull and bones icon. The war machine was built up to work on the model of 'blitzkrieg' tactics, fast-moving tanks and troops, to overwhelm the opposition. Finally, the so-called Aryan model of racial supremacy was defined, with a Master race set out and an active campaign was launched to produce more Aryan children.

Hitler launched his war onto the world in September 1939, although he had previously taken over land without a shot being fired. His troops overran Poland in the east, to the west France, Belgium, The Netherlands and the northern countries of Denmark and Norway in quick order. In 1940, German troops landed in Northern Africa and the Balkans were taken with the help of their Italian allies. The only major front that was not conquered was the UK, who held out resolutely.

It was in June 1941 that Hitler - increasingly confident - made his first massive Pluto blunder. Operation Barbarossa was launched against the Soviet Union in what can only be described as one of the great supreme military disasters of all time, the purpose of which was to create Lebensraum, or 'living space' for the Master race. Against advice of his generals, Hitler launched a summer campaign and fully expected to be in Moscow well before winter. So confident was he, that he failed to identify the lesson of Napoleon a century previously. Napoleon's own account was: "The most terrible of all my battles was the one before Moscow. The French showed themselves to be worthy of victory, but the Russians showed themselves worthy of being invincible."

What Hitler failed to take into account was the extreme ruthlessness of the Soviet leaders to sacrifice their people, until the winter set in towards the end of 1941. There was no swift march to Moscow. Only a very long battle which depleted his troops and ended in defeat. The first of many such reverses was the ending of Seige of Stalingrad on February 2, 1943. About 91,000 German soldiers surrendered, including 22 Generals. This was the worst and the most savage setback to occur for the German people of that time. The era of invincibility was over.

It took another two hard and very long years of savage warfare, but the might of Nazi Germany was totally and utterly destroyed. The armies from the west as well as the east, crushed Germany and symbolically met in its capital, Berlin.

In Jan-April 1943, Pluto was moving retrograde towards a station at 5 degrees Leo. That was the exact point of the 4th House cusp in the Third Reich chart. It was only much later in that year that Pluto moved away from that significant point. The 4'th House deals with land and under the Third Reich, land to expand. Hitler's ideological policy of Lebensraum collapsed under the weight of a crushing and humiliating defeat.

What was Saturn doing all this time? It was to be found in the 10'th House, a very prominent position. At the time of its defeat in Stalingrad, Saturn was crossing the ascendant and Germany was facing its identity anew. But the 10'th House natal position has its own story, because that would imply that Germany's role should really have been one of moderation and caution, especially in light of its conjunction with the Sun.

The obvious conclusion would be, that Germany of that era was so opposed to any form of control, that all Saturn-type energies were rejected. But you can't reject a part of you, you can only project it elsewhere. Which might explain why the regime chose to find scapegoats. The term 'untermenschen' means sub-human and anyone holding back the 'greatness' and 'purity' of the Reich was considered deemed 'Saturn energy', or unworthy of inclusion.

Modern day Germany : no end to the refugees in 2017

The Federal Republic of Germany was born of the ashes of the Nazi regime on May 24, 1949. Once again, Pluto (7'th House) and Saturn (8th House) jump out at us, but this time for far different reasons. Saturn is in the house of debt and this is a society deeply concerned about balancing the books. But its (again) transiting Pluto that takes center stage in 2017. By transit, its in the 1'th House - a coming to terms with itself in the world. A redefining of its national values into a time of increasing uncertainties.

The world that its Chancellor Mrs Merkel needs to make sense of, is of terrorism, never-ending wars, refugees, right wing agitators and a collapsing Euro zone. Where does Germany place herself in this confusion? What role does she play? Most importantly, can she persuade the German public to go along with it? The major dilemma for Germany is historic. Does a country with its Nazi past not have a moral duty to protect the weak? Can it afford to be a neutral bystander?

Throughout most of 2017, transiting Pluto will be square to the Moon in the 1949 chart. Saturn will be in the 12'th House. The questions raised above will be at the forefront of discussion through the year. The two horns on which the German public will be asked to sit, are (a) is it not our 'humanitarian duty', to assist the weak, the elderly and the children, fleeing from wars especially since Germany caused so much damage not three generations ago, or (b) who will pay for resettlement of strangers in our land who have contributed nothing to us?

More than anything, it is Saturn this time which is likely to provide the answer. The 12'th House is where we face our demons. With Saturn (our teacher), lurking there, expect Germany to consider the plight of refugees from an historic perspective. It will be guilt - or the lack of it - more than anything else, on which this internal battle will rage.

Comments: German 2017, from Hitler to Merkel - no end to the refugees